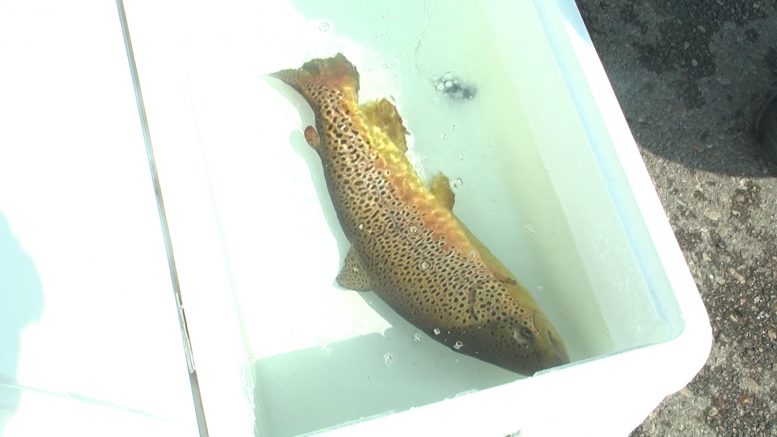 ALPENA, Mich. — Northeast Michigan’s most wanted fish, the 45th Big Brownie, is now on the loose in Lake Huron. The brown trout was released Thursday morning, and the big question is will someone catch the $25,000 fish?

Back in 2017, Big Brownie was reeled in for the first time in 43 years. Robert Westenbargar set the line and Jan Stepanski caught the grand prize.

With no boundaries this year Lake Huron is wide open, and Tournament President Brad MacNeill weighed in on where anglers might find the coveted fish.

“Well they don’t go too far. I’ve seen that in the last couple of fish that we’ve stocked,” said MacNeill. “One was caught during the festival and one was caught right after, right here on the breakwall.”

The tournament would not be made possible without Cedarbrook Trout Farm providing Big Brownie. Owner Jerry Kahn is happy to show and inform people about browns.

“They’re a beautiful fish,” said Kahn “They are kind of hard to raise, so there are not very many people raising browns. There’s a lot of rules and regulations that have put a lot of the old guys that have been doing it for a while are kind of retiring and getting out.”

The 45th Michigan Brown Trout Tournament kicks off this Saturday alongside the one day Super Tournament.

Peters introduces legislation to crack down on Chinese fentanyl