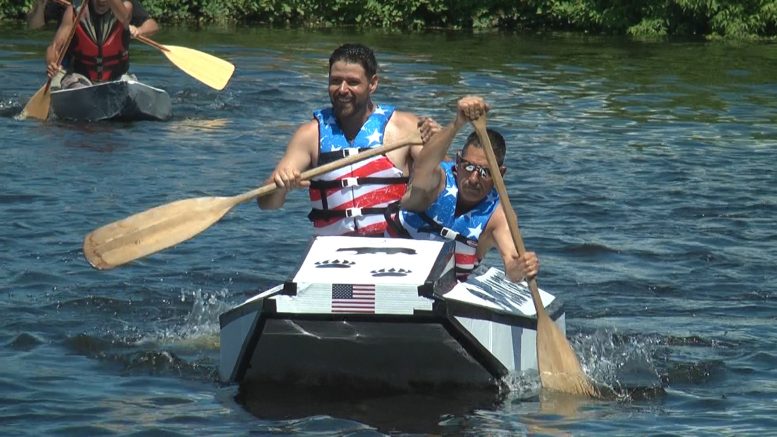 ALPENA, Mich. — It takes skill to make a cardboard boat. Although The Bear Crew did not win this year, their builder is one to admire. Bernie Schaller designed and built the vessel in 20 hours. The former outboard boat racer and class of 1971 Gulf Marine Racing Hall of Famer loves building boats, but he would not have found his passion without a team.

“A crew to carry my boat. and put the motors on and put the right props on and everything,” said Schaller. “Without the people helping me, I never could have gotten where I was.”

The Bear Crew won the Great Lakes Maritime Heritage Center’s Cardboard Boat Regatta in 2018. The ten-year-old boat ran it’s course and was torn apart after the victory. Schaller built a shorter, slimmer boat than last year, hoping to have another chance at winning the race on the Thunder Bay River.

“Well you guys told us we had to come back and defend our championship,” said Schaller. “So when I built the new one all the panels were painted with latex paint. But they’re all flat panels and there’s no glue. They’re just all taped together.”

The vessel earned this year’s Pride of Fleet Award for being the best engineered, which helped The Bear Crew dominate the two-man race. Unfortunately, the boat fell short of the Thunder Bay Cup.

“About, a little more than halfway through it Jeff (Jr.) said we’re starting to take on water,” said Jeff Weiler Sr. “I was like alright that’s not going to be good for the rest of the day.

Weiler Jr. could tell as soon as the race for the cup began that things were not good with the boat.

“Dropped down to one knee and water just started coming through,” said Weiler Jr. “It was not good.”

Prior to the race, 79-year-old Schaller told the Weiler family that this would be his last boat.

“I always say that, not just about building boats but a lot a things,” said Schaller. “Oh I’m never doing that again, but somehow I end up doing it. So, you just never know.”

The Weiler’s plan on racing in the 10th Annual Cardboard Boat Regatta next July 4. Hopefully in another boat made by Schaller.