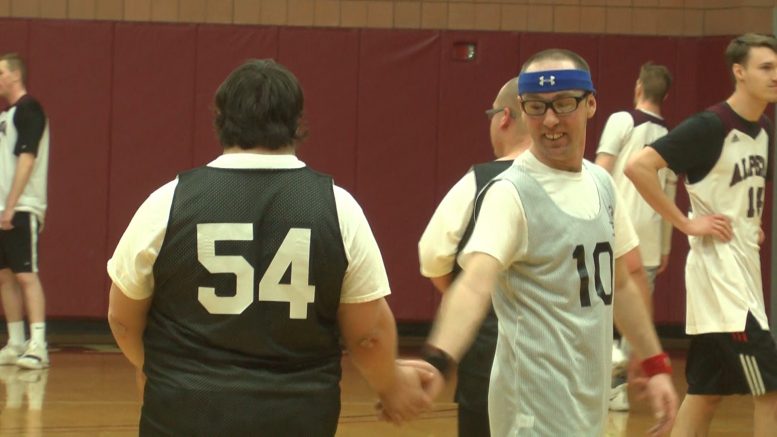 Michigan — March 21st marks world down syndrome day. A day for people to show their support. One trend is to wear mismatched socks, but the Alpena Community College showed their support with a very unique basketball game.

Park Arena in Alpena is home to the Lumberjacks, but this time they shared the floor with Special Olympics for the 17th time.

“I like it. I’m going to do it again,” said Brian Psenski.

ACC freshman guard Tylor Ross enjoyed taking the court and meeting new friends, but there was one familiar face.

“The coolest part for me though is my mom is a special ed teacher over in Fairview and I was looking around and I knew one of the kids (Chris Spencer),” said Ross. “He went to Fairview. He remembered me too. It was really cool for me.”

This game was especially fun for state competitors like Psenski. We asked him what he thought about the Lumberjacks.

“I like when they dunk the ball. It’s pretty cool. It feels like in the NBA.”
A little trash talk right there, but that’s part of what made this game fun. Trash talk aside, the athletes made some tough buckets.

“They were super excited about it and they just really all went after it,” said Ladyjack Taylor Livingston. “They were getting aggressive with each other and it was fun. It was really intense.”

The impact play of the game occurred when Lumberjack’s Oliver Rice orchestrated the floor, bounce passed to Nick Stephan down low and he scored. The crowd went wild.

“I like basketball. We had some points,” said Stephan. “We had a good day.”

For the ACC athletes this was a once in a lifetime opportunity that they will never forget.

“Actually a privilege to be able to do it with them. To make them happy. It’s just a great thing.”

Oscoda defeats Alcona in round one of Districts