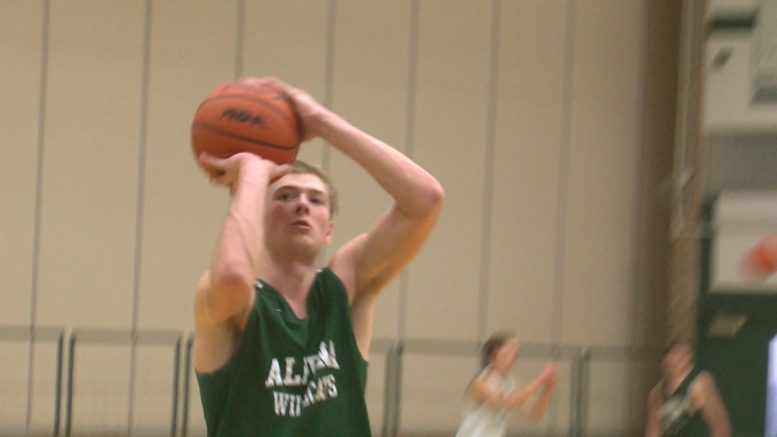 DeRocher is 29 points away from breaking the record that was set back in 1972, 47 years ago, by Raymond “Butch” Feher. The record holder later went on to play college ball at Vanderbilt and then took his talents to the NBA as a guard for the Phoenix Suns (1976-77). Feher scored 1,435 points during his high school career at Alpena, so reaching this feat would be huge for DeRocher.

“Having the opportunity to coach a player like Chris is always exciting,” said Head Coach John Pintar, who’s son, Tyler Pintar, sits third on the all-time record board with 1,261 points. “It’s even more exciting to have the opportunity to see history, and it will be awesome when it happens.”

The senior already joined a prestigious group of Wildcats, becoming one of four to reach 1,000 points. He also jumped past his Aunt Cindy’s record at Alcona High School. Cindy currently sits third with 1,263 points.

“Probably about four or five games ago my dad leaned over and he said Chris just passed you,” said Cindy. “I’m very excited for Chris and the team and the community of what we are experiencing. A long-time held record and it’s pretty amazing.”

DeRocher has averaged 23.9 points per game as a senior and earlier this year he scored 40 points against Escanaba, so he is very capable of reaching this feat Tuesday night. Last time Alpena faced Sault Ste. Marie was November 28th when the Wildcats won 62-20 on the road, and DeRocher scored 18 points.

The Wildcats and Blue Devils tipoff at 7 p.m. Alpena High School students who bring their ID can get into the game for $1 and help pack the gym for this historic event.

Kellstrom, Langley and Owls are hungry for more