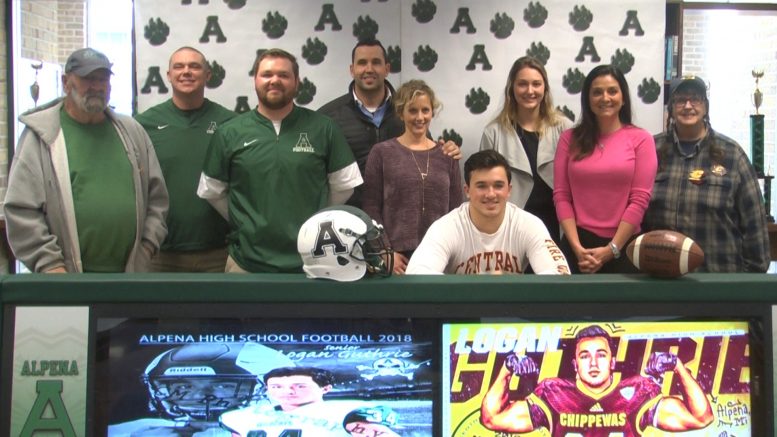 ALPENA, MI — December 19, 2018 marked the day when high school athletes put pen to paper on national signing day for division one football athletes. Alpena running back and linebacker Logan Guthrie signed to play football for Central Michigan University, a school that just hired new head coach Jim McElwain after finishing the season (1-11). McElwain was named the 2015 SEC Coach of the Year, so he’ll bring a lot of experience to the CMU program. Guthrie is excited to start his college journey.

“From not even wanting to play football freshman year to it being the sport that takes me to college, there was a lot of hard work put in,” said Guthrie. “It was mostly just the people pushing me. Coaches, parents, in the weight room, lots of camps and just sacrificing time. I’m glad it’s all led up to this.”

The 6-foot-2, 215 lbs. Wildcat will be remembered at AHS for his rushing abilities. He broke the school career rushing record ending his campaign with 2,700 yards. During his senior year he rushed for 1,073 yards and 11 touchdowns, and on defense he added 30 tackles. His career defensive stats include 122 tackles, 2 sacks, 2 forced fumbles and 1 fumble recovery.

“This has been a real successful year for Alpena athletics,” said Alpena Athletic Director Tim Storch. “The entire school and community is reaping the benefits. It’s because of athletes like Logan and other individuals who know are going to take their talents to the collegiate level.”

Central Michigan Head Coach McElwain had this to say about Guthrie on Twitter:

Logan is a true football player and we can’t wait until he gets to CMU. He is very strong and plays with a great motor and intensity. #L19HTTHEFIRE https://t.co/HYhFdYFrt7

Guthrie will join six other athletes on campus January 6, 2019.