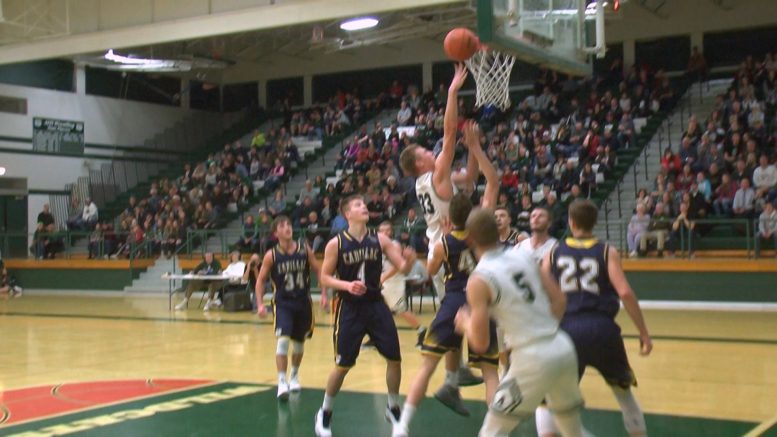 Chris DeRocher makes a layup as the Wildcats improve to 7-1 (2-1) and head into the new year with a victory.

ALPENA, MI — The number one thing that head coach John Pintar and the rest of Alpena’s players wanted to improve on last season was finishing games. Their improved mentality was on display Friday night when they hosted Cadillac in a Big North Conference showdown.

Following a slow start, Bruz Cropping and Aidan Goike started Alpena’s scoring as they built an 11-4 lead over the Vikings. Chris DeRocher and Cropping each combined for 6 points in the second as Alpena continued to build their lead. The Wildcats led 25-9 at halftime.

There was a slight momentum change in the third. Alpena’s strong defense lost their discipline as they started committing fouls and were outscored in the third while still maintaining a 35-22 lead.

The fourth quarter Wildcat offense was made up of mostly free throws, but the Wildcats finished off Cadillac with a 53-37 victory.

The win boosts Alpena’s record to 7-1 on the season and 2-1 in the Big North Conference. The Wildcats can enjoy the win all the way until the start of the new year, as they won’t play again until January 4th against Escanaba at home.

Wildcats just too much for the Blue Devils

Onaway wins battle of the Cardinals versus Johannesburg-Lewiston