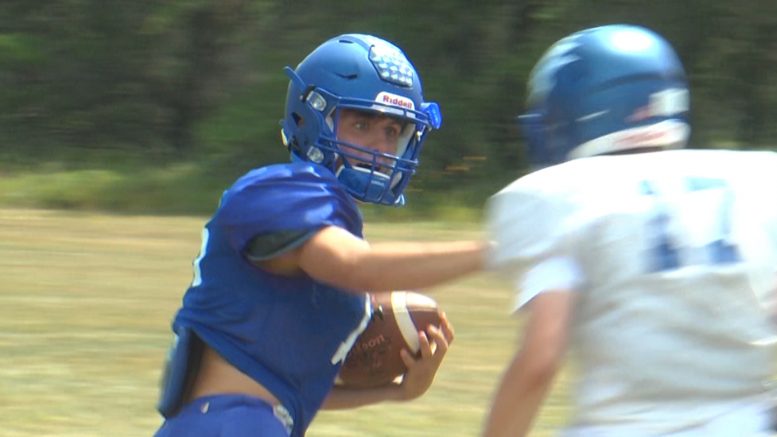 OSCODA, Mich. — High school football scrimmages kick off this week, including in Oscoda. The Owls are bringing back a lot of talent this season, and are hungry to win a district title. This group of Owls should be one of the toughest team in Class C play.

The Owls finished last season (8-2), losing in the first round of playoffs. Expect an even stronger Owls team with eight-plus seniors returning to the roster.

“We’ve got a really strong, quick, competitive team,” said senior lineman Adam Hein. “We did lose a lot of big guys on the front.”

Oscoda may be lacking in size after losing about 700 lbs. on the left side, but they do have speed and strength.

“We got speed, we’ve got hard-hitting, we’ve got quick thinking,” said senior lineman Christian Ward. “We’ve got agility. We have a whole football team.”

The dual threat offense led by senior quarterback Brayden Mallak and junior Franklin would not be possible without center big man Christian Ward.

“I have not taken a snap from anyone else,” said senior quarterback Mallak. “Before the game they always tell me that they’ve got my back and everything.”

What makes the Owls so powerful is their brotherhood. They are all willing to help each other.

“I feel like we’re a well-oiled machine when we’re all clicking,” said Franklin. “I’m just trying to do my part and win.”

The Owls start their season with a revenge home game against Houghton Lake on Thursday, August 29 at 7 p.m.

Roundball Roundup: Wildcats fall to Vikings and Owls surge in 2nd half to beat Tigers

Battling for an 8-man title: Posen vs. Au Gres-Sims