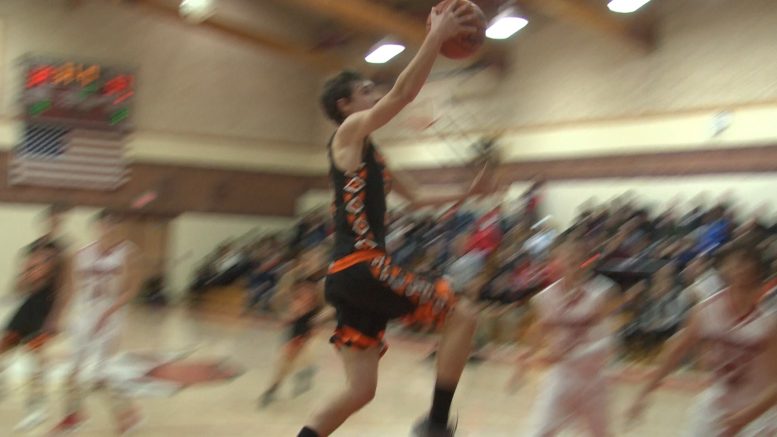 Posen, Mich — The Posen Vikings hosted the Rogers City Hurons for a North Star League battle. The Hurons entered the match winning six of their last seven games, while the Vikings lost their last two games to the top two teams in the NSL-Big Dipper, Oscoda and Mio.

First half, Rogers City knocked down five 3-pointers helping the Hurons get to an early 33-19 lead at halftime. Jeffery Ellenberger made 3 of the five 3-pointers, two in the second quarter and Posen’s Jeremy Misiak and Jared Sharpe were the only Vikings to score in the second.

Posen tried to close the gap outscoring Rogers City 10-7 in the third quarter, but that was not enough as Ellenberger made two more 3-pointers and 12 total points in the fourth. The Hurons defeated the Vikings 59-39. Ellenberger made 24 total points for a career high, just one day before his birthday.

“I haven’t been having that many points this season,” said Ellenberger. “I think last game I only had six points, so I mean it was just clicking this time. It was really exciting.”

This win was extra special for Rogers City Head Coach Matt Ponik, who graduated from Posen High School. He was part of the (2004-05) Vikings squad that advanced to the Class D State Semifinals and lost to Detroit Rogers 55-45. In that game, Ponik contributed 19 points (5-12 FG, 2-5 3-PT, 3-4 FT) and 5 rebounds. Posen finished that season with a (25-1) overall record.

“Love coming back here,” said Ponik. “It’s bitter sweet you know. Really enjoyed the memories that I had here (Posen). I get to see the guys that I’m coaching, which is on the rival side, be successful. It’s enjoyable in that part.”

Petoskey tops Alpena for the lead in the Big North Conference

Lumberjacks team up with Special Olympics