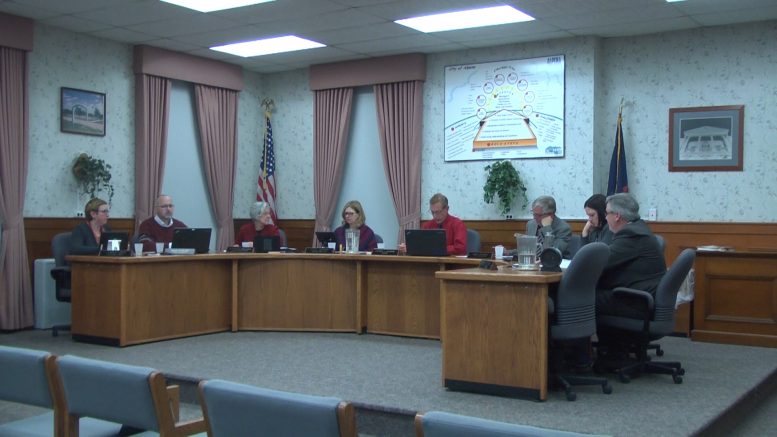 Alpena, Mich. —  Alpena City Council voted unanimously to opt out of allowing recreational marijuana facilities in the city, joining a number of entities around the state.

All city council members were in agreement to opt out, establishing public ordinance 19-441 which prohibits facilities to operate in the city. Now, the city can opt in at anytime.

The main reason for opting out was the lack of permanent laws which haven’t been established by the Michigan Department of Licensing and Regulatory Affairs. Council plans to revisit the potential for having recreational marijuana facilities when a more permanent group of laws is established.

City council is also having an ordinance revised that will ban the public use of marijuana. The topic of debate stemmed from the word inhalant. Mayor Matt Waligora wanted some clarification in the terminology.

“We’re receiving paraphernalia for the covert use of marijuana,” said Police Chief Jett. “Just in the last week, we had an individual, without going into a lot of details, that had what appeared to be a key fob, and you hit a button, and put up to your mouth, and it’s inhaling marijuana.”

Tonight, the council along with police Chief Joel Jett discussed the details of that ordinance. The discussion mainly focused on emerging and alternate uses of the drug rather than regular smoking. Specifically, the focus was on “vaping.”

The ultimate decision for Ordinance No. 19-442 was to change wording in the ordinance to include all smoking “apparatuses” whether that be vapes or new types of technology. The council will revisit the ordinance again at the next meeting.

ORDINANCE NO. 19-441
AN ORDINANCE OF THE CITY OF ALPENA, MICHIGAN, AMENDING CHAPTER 18 –
BUSINESSES, ARTICLE I. IN GENERAL, Sec. 18-1 MORITORIUM ON ISSUANCE OF
PERMITS OR LICENSES FOR SALE OR DISPENSATION OF MEDICAL MARIHUANA IN
THE CITY – BY REPEAL OF SAME AND ADOPTION OF NEW LANGUAGE IN LIEU
THEREOF.
BE IT ORDAINED BY THE MUNICIPAL COUNCIL OF THE CITY OF ALPENA, STATE OF
MICHIGAN, AS FOLLOWS:
Chapter 18 – Businesses, Article I, Sec. 18-1 is hereby repealed in its entirety and in its place
the following provisions are hereby adopted:
Sec. 18-1. Prohibition of marihuana businesses and establishments within the city.
(a) Intent. The Intent of this Ordinance is to exercise the City of Alpena’s authority to
prohibit the establishment or operation of marihuana establishments within the City as such
facilities are defined in the Michigan Regulation and Taxation of Marihuana Act (the “Act”).
(b) Prohibitions. Pursuant to the Act, Section 6.1, the City prohibits the establishment
or operation of any and all categories of marihuana establishments within its boundaries.
(c) Effective Date. This Ordinance shall be in full force and effect immediately due
to the need to protect public health, safety, welfare, and the orderly administration of the affairs
of the City of Alpena.
Any ordinance or parts of any ordinance in conflict with any provision of this ordinance
are hereby repealed.
EFFECTIVE DATE
THE PROVISIONS OF THIS ORDINANCE SHALL TAKE EFFECT IMMEDIATELY
AFTER BEING ADOPTED BY THE MUNICIPAL COUNCIL AND SHALL BE DULY
PUBLISHED WITHIN 10 DAYS OF ADOPTION.

ORDINANCE NO. 19-442
AN ORDINANCE OF THE CITY OF ALPENA, MICHIGAN, AMENDING CHAPTER 54
– OFFENSES AND MISCELLANEOUS PROVISONS, ARTICLE I., IN GENERAL, TO ADD
SECTION 54-11.
BE IT ORDAINED BY THE MUNICIPAL COUNCIL OF THE CITY OF ALPENA,
STATE OF MICHIGAN, AS FOLLOWS:
Chapter 54 – Offenses and Miscellaneous Provisions, Article I. – In General,
Sec, 54-11. Marihuana and marihuana accessories.
(a) No person shall smoke, cultivate, distribute, process, sell, or display marihuana in
any form or marihuana accessories in a building owned or operated by the City of Alpena.
(b) No person shall smoke marihuana in any form in a public place within the
boundaries of the City of Alpena, including but not limited to any street, sidewalk, highway, alley,
park, or parking lot located therein, or the city marina or city beaches.
(c) Any person violating this section shall be responsible for a civil infraction and shall
be assessed a civil fine not to exceed $500.
EFFECTIVE DATE
THE PROVISIONS OF THIS ORDINANCE SHALL TAKE EFFECT TEN (10) DAYS
AFTER BEING ADOPTED BY THE MUNICIPAL COUNCIL AND DULY PUBLISHED.
I HEREBY CERTIFY THAT THE ABOVE ORDINANCE WAS ADOPTED BY THE
MUNICIPAL COUNCIL OF THE CITY OF ALPENA, MICHIGAN, AT A REGULAR MEETING

Insights into Northeast Michigan: Alpena’s Canada Goose population and the problems they bring