Rogers City Native Boyd Byelich is back from his second trip overseas to aid Ukrainian refugees who have fled the country.

He’s turned his home into a donation center where he takes in clothes that will eventually make it’s way into the hands of Ukrainian refugees. Initially starting with friends and families, the donations coming in have come from as far as other states. “I come home from work every day and if I don’t find another box or couple bags of clothing, it’s unusual,” said Byelich.

Byelich said, in March, he felt a powerful force pushing him to do something to help the refugees. “I immediately started to figure out where I might go, what I might do, how I might best help, but I just knew that I had to go,” he said. 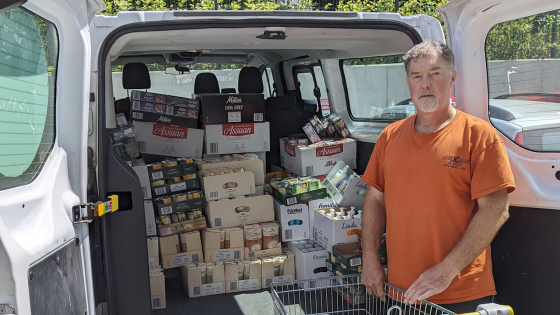 The Rogers City man made his first trip to Poland in April where he helped hand out clothes and helped provide meals. “We would have about 1,100 a day come through and we would give them on average around 9,000 items of clothing,” Byelich said. “So, at that rate, you can imagine volumes of donations are gone through very quickly.”

When he returned to the United States, Byelich set his house up to resemble what the clothing distribution center where he volunteered looked like as the donations continued to pour in. “It’s set up very similar. I’m just a much smaller version,” he said. “We’ll dump a bag or box on the table. We sort them by gender, by age, and type of clothing, whether it’s pants, shirts, jackets.”

Byelich returned from his second trip to Poland this week, but this time he also went through western Ukraine. While he felt he wasn’t in serious danger, it was definitely different compared to the time he spent in Poland. “We’re flying down the roads. There’s not much traffic management so you got cars coming at you. You’re dodging out of the way,” he said. “You have guys walking around with machine guns and sandbag barriers by every bridge that you came to.”

Byelich is now also taking food and toy donations as well. He plans to head back to Poland this December with hopes of having enough toys for the children who have fled their country.

He asks anyone who is willing to donate to contact him at 307-286-4807 or visit his organization, One Box for Ukraine on Facebook.