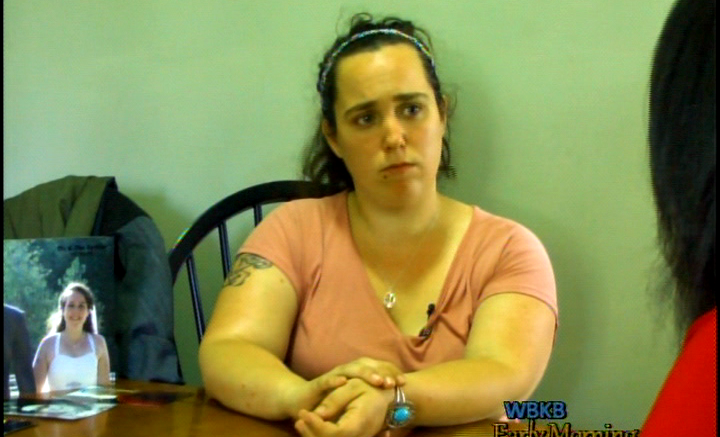 A case that rocked the city of Alpena has grabbed the attention of locals. Now the wife of the accused child abuser, Merlin Pardike is speaking out.

“All he wants to do is be there and love us and support us,” a tearful mother of three said.

Those are the words Taylor Renee Pardike wants everyone to hear. The mother of three said she’s been in tears ever since her husband went to jail for 90 days for child abuse just a few weeks ago.

Pardike is currently serving his time behind bars, but his wife said she doesn’t believe that her husband abused her child.

“I never seen this coming. I know my husband pled guilty and I still stand by his innocence,” Pardike said holding back tears.

Pardike who goes by her maiden name, Allen was pregnant at the time with her husband’s 1st child when her now two-year-old daughter from a previous relationship was assaulted.

“It’s been a lot of strain on us. I was pregnant when my daughter was abused. I was going through a lot of health problems on top of that, and going back to basically being a single mom, nothing in life prepares you for this,” Pardike admitted.

To cope with her difficult time Pardike said the couple have been in counseling. The nightmare happened just a month after the couple walked down the aisle to say their “I Do’s.”

Noticing bruises on her child, Pardike said she was contacted by her daughter’s daycare. It was Pardike who told the daycare provider to call Child Protective Services not knowing that it would all back fire and go down hill.

“I had my daycare provider call, because there’s a 1-800 number that you can call. Especially daycare providers if you see anything they’re supposed to report it. So I told her: ‘I was on board with it.’ I can’t imagine who would want to hurt a one-and-a-half year old back then. I just can’t imagine,” she explained.

Pardike’s husband became involved because he was the last person known to be with his stepdaughter during the time of the incident. Pardike claimed her husband pled guilty to save his family.

“At the end of the day I guess we just decided: ‘What would we do for our kids?’ Would I’d rather go to a trial where there’s going to be a jury and let his fate be up in their hands or pled guilty and know that it’s going to be three months. We have a new baby together and he’s missed out on a lot of time and opportunity to bond with her,” Pardike said.

The mother of three is devastated by the reputation this case has brought to her and her family. But she hopes to share the man she believes her husband to be.

Tune in later this week for more.

Mother charged with assault, threatened her child with hammer

Planting of pinwheels raising awareness over child abuse and neglect