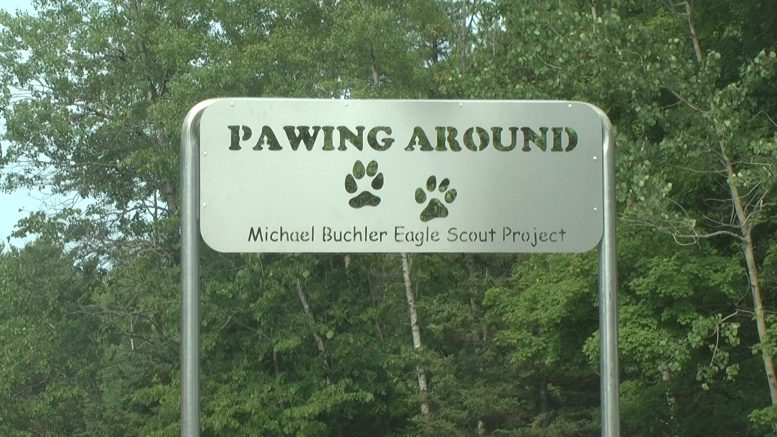 'Pawing Around' dog run will now be available to potential new owners to play with dogs before choosing one.

Alpena — Saturday will be a day that lives in Boy Scout Michael Buchler’s memory for a long time.

He officially completed his Eagle Scout Project, opening the ‘Pawing Around’ Dog Run Park at the Huron Humane Society. The dog run is meant for potential new owners to play with the dogs at the humane society before adopting them. That way, the person can experience the dog to see if it’s a good fit. The project took around two years to complete with plenty of setbacks and rejections along the way.

“One of the first ones was that I couldn’t find a place to do it until the humane society,” said Buchler. “The second biggest one was about three inches down below me, it turns into solid limestone so we had to find a way to break that up so then we could put the post down to concrete them.”

Over 400 hours went into the project. The future Eagle Scout can now breath a sign of relief after watching his dream come to life.

“It felt very relieving and great at the same time because now that it’s finally open, now that it’s all done, all of the dogs in the humane society can use it to the fullest extent,” said Buchler.

A ribbon cutting ceremony took place in the afternoon where Buchler read the letter he read to community members to gain support for opening the park. The letter touched the hearts of many and focused on his childhood battle with epilepsy.

Buchler thanked all of his friends, families, and volunteers. Cookies and punch were provided and folks could bring their dogs to play in the brand new park.

The dog run park will be open the same hours as the Huron Humane Society. For those hours, visit their website https://www.huronhumanesocietyinc.org/