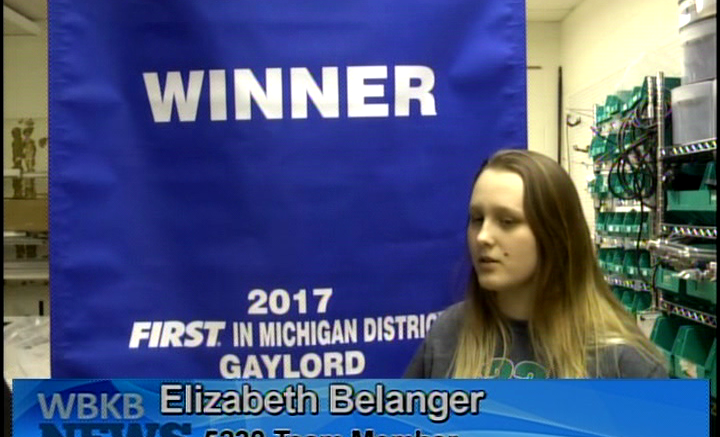 The Alpena Wildcat FIRST Robotics Team is gearing up for another district competition coming up April 6th. Alpena’s 5230, and 5505 teams are working hard on improvements for the upcoming competition that will be held in Traverse City.

The teams will be competing once again in a game that is involved with throwing a ball into a goal post 8 feet off the ground, controlled entirely by the students who built them. Winner at the Gaylord District’s Competition, Christian Stevens said his team would be coming up with better strategies for the next competition.

“So you have to scale a rope, and our climber was not very good, so we’re definitely going to work on that for the next competition,” Stevens said.

When it comes to working to win, teams have to be organized, and that’s just what 5230 team member, Elizabeth Belanger said she would do.

“We have a structure thing so it helps everyone know where they are, and what team they need to be on. Everyone knows what he or she should be doing and we have a timeline so they have to get it done on that time. We all follow that nicely to get everything done, and everyone knows what they’re supposed to be doing,” Belanger said.

40 teams from across the state of Michigan participated in the Gaylord Competition last week. Team 5505 won the district championship, and team 5230-finished 14th.

Hopefully both teams will place high in the Traverse City Competition in two weeks.