The legalization of marijuana has changed how dispensaries sell and market their medicinal and recreational products. It was noticeable this week when one customer won a special prize.

A customer at Neighborhood Provisions, Jillian Conley, stopped by Alpena’s first recreational cannabis dispensary to pick up one of Grasshopper Farms featured products where she entered “green ticket” giveaway; a contest that launched on April 20, at retailers across Michigan. “So the green ticket giveaway is a gift that Grasshopper Farms did. For every 8th you get of their product you get a scratch ticket which puts you in a raffle for different prizes they’re doing,” said Kevin Currier, owner of Neighborhood Provisions. “It really brings in a sense of community deed that they’re doing to it all.”

Jillian, also won VIP access to the farm as well as entry into all Grasshopper events and the significance of being the first–ever ticket winner. “Oh, we love the idea. Any promotions you can get from the vendors, from the cultivators, it gets their interaction; you get their following as well. The big thing is to get as much traffic out about our business,” said Jeff Judd, co-owner of Neighborhood Provisions. 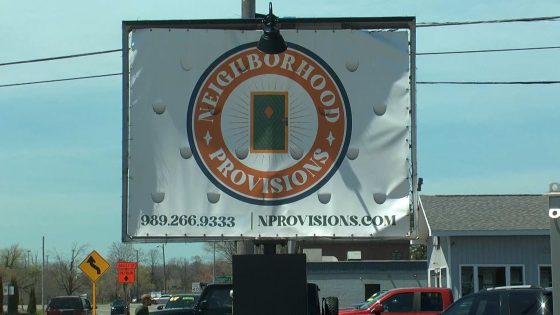 Michigan occupants can apply for the contest at any participating retailer that sells Grasshopper Farm products. Neighborhood Provisions envisions many more contests in the future. “We’re going to start creating more contests like that. Grasshopper Farms was the mastermind behind this one and we carry their product; we love their product,” said Currier. “So they send us a bunch of their scratch cards, and luckily, they handle all the stuff on the back end because they do a beautiful job of it.”

The contest runs through May with new winners announced each week.