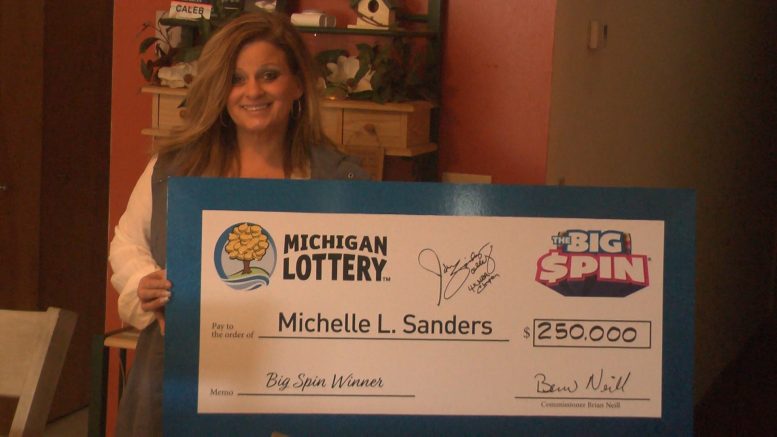 HILLMAN, Mich. — 10 days before Christmas, Michelle Sanders’ life took an unexpected and unfortunate turn. She was let go from her job at Montmorency’s register of deeds office. “I think I cried a lot. I cried for weeks,” she said. “Everybody would get up to go to school or work and I’m like, ‘what am I going to do?’ You can only clean so much and you can’t really afford to go see anybody or do anything if you don’t have a check coming in.”

Much like her grandfather, Sanders likes to buy lottery tickets, and a few weeks after being fired, her luck changed. At first, this ticket didn’t seem like a winner. It was only after she entered a second chance code online when she figured out that this ticket wasn’t what she thought it was. “You can’t win if you don’t do it. So I was feeling lucky, and even though they were losing tickets, I was having a really good day.”

Sanders’ ticket had won her a chance at the Michigan Lottery’s Big Spin game, with the minimum prize being $100,000. On Jan. 30., it was finally her turn to take the spin. She said her legs were trembling as she watched the wheel spin for what seemed like an eternity. Then it stopped, and she was $250,000 richer. Sanders said she already has plans for some of it including wedding her fiance, putting some towards her son’s college fund, and hopefully taking a cruise with her family later in the year.

Regarding future work, Sanders said that she really misses her old job and that she is considering running for the register of deeds position in Montmorency County. “I’ve had quite a few people that will support me that I’ve known a long time and know that i can do it.”

Hillman woman gets chance at the Michigan Lottery’s “Big Spin”