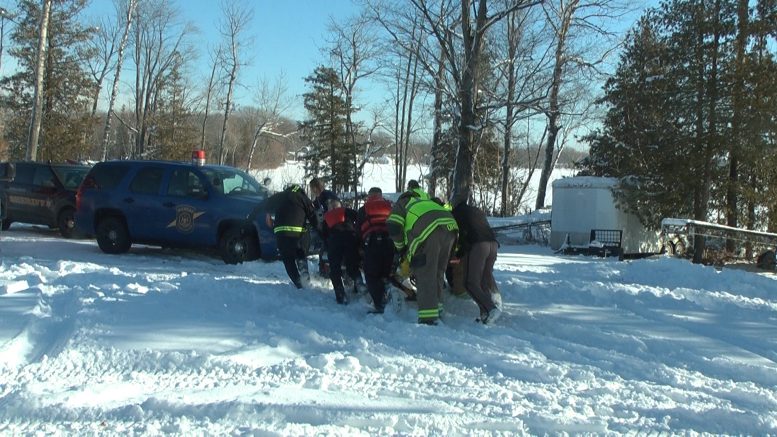 ALPENA, Mich. – A couple had fallen through the ice while riding their snowmobiles on Long Lake Friday morning.

The boyfriend survived, but first responders couldn’t save his girlfriend from Linwood, Michigan. Police and rescue teams are sending a strong message to everyone that ‘no ice is safe ice.’

60–year-old Lynne Bever suffered from cardiac arrest and drowned. Rescue teams worked to keep her alive after she went through the ice on her snowmobile.

“It’s just a matter of minutes before hypothermia kicks in and sucks all your strength,” said Chief David Robbins, Alpena Township Fire Department.

Bever’s boyfriend rushed to shore to contact police. When troopers arrived on scene, the boyfriend rode back on the lake to save Bever. That’s when the boyfriend and his snowmobile fell through the ice. Rescuers saved him, but it was a tough situation rescuing Bever.

“We had rescuers that were going through the ice during the rescue attempt,” said Robbins. “That’s how thin the ice is out here.”

Officers say they don’t want this to happen to anybody else. “Definitely make sure it’s safe before you go out because it could be life or death,” said DNR Conservation Officer Jessica Curtis.

First responders also say any amount of ice is unsafe. Four to 9 inches of ice can still crack, especially during these warmer temperatures.

“As you can see it’s very thin,” said Curtis. “Four days ago this was open water, but it looked like safe ice and they drove right over it.”

Less than a week ago, two friends were forced to escape out their car windows when an ice fishing trip on Long Lake had gone wrong. “I’d wait until it’s below freezing night after night for weeks in a row,” said Curtis.

Even if conditions are right, people venturing out should tell family where they’re going.

“A fun day on the ice is not worth my life and it’s not worth anybody’s life,” said Curtis, “and that should be everybody’s motto… [no ice is safe ice.]”