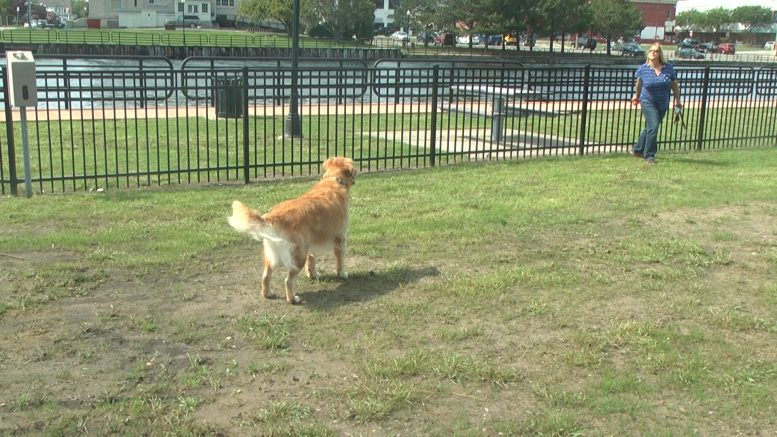 A dog and it's owner enjoys the new Thomas Stafford Dog Park on Friday afternoon.

Alpena — The city of Alpena opened the Thomas Stafford Dog Park this afternoon. The new, spacious area for dogs is located behind the Alpena Post Office in North Riverfront Park. A few dogs and their owners made it to the soft opening on Friday afternoon.

“I think it’s great that they’re getting stuff out there for people to use and have… it’s a good time,” said Dog Owner Steve Shaver. Shaver brought his daughter Kenzie and their dog Lucy to the park after hearing about the opening that day.

The park features a few special features for the pups including a water spiget, concrete tunnel, and a ton of open space to run around. Four benches are set to be installed once the city’s contractor is available to pour concrete and set the bench. So far no hours have been set for the park. Dog owners are asked to pick up their dog’s waste. For the first day of operations, the dogs that explored the park exhausted their energy all over the park.

A formal dedication ceremony for Thomas Stafford will take place in the near future. The city is still waiting on signage and final arrangements. Expect to see more people and dogs on the north side of the Thunder Bay River.