Tonight: Showers and possible storms expected throughout Northeastern Michigan tonight, transitioning into partly cloudy skies after midnight. Wind between 10-15 mph from the south, lows in the low-60’s.

Tomorrow: Partly cloudy skies expected Thursday with wind from the north between 5-10 mph and highs in the mid-70’s.

7-Day: Highs stay in the high-70’s until Friday, but jump into the low-90’s on Saturday. Precipitation expected on Sunday, cooling down the region for the start of next week, with precipitation possible for the beginning of the week and highs moving back into the 70’s. 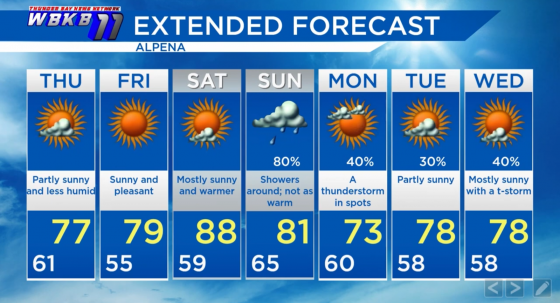