ROGERS CITY, Mich. — The Presque Isle County Sheriff’s Department announced on Facebook yesterday that they will not be actively investigating anyone wearing or not wearing a mask. This decision comes after Governor Whitmer signed an executive order on Friday, stating that everyone entering a public space indoors must be wearing a face covering starting July 13. The order also says that businesses open to the public must refuse entry or service to people refusing to wear one. Failure to comply with the order could result in a $500 fine. 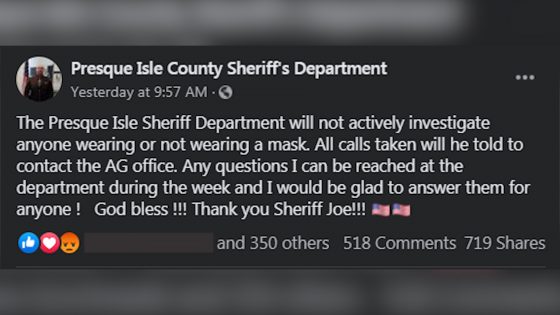 Sheriff Brewbaker also added that if a problem should arise between a store and a customer regarding wearing a mask, the department will respond in the same way they always do. “Any call we get we’re going to handle everything as we always did,” he said. “If we get a call and we’re able to respond we’ll go over and get the information. That information will be turned over to the prosecutor and they can take it from there.”

A date for the ending of this executive order has not yet been announced.