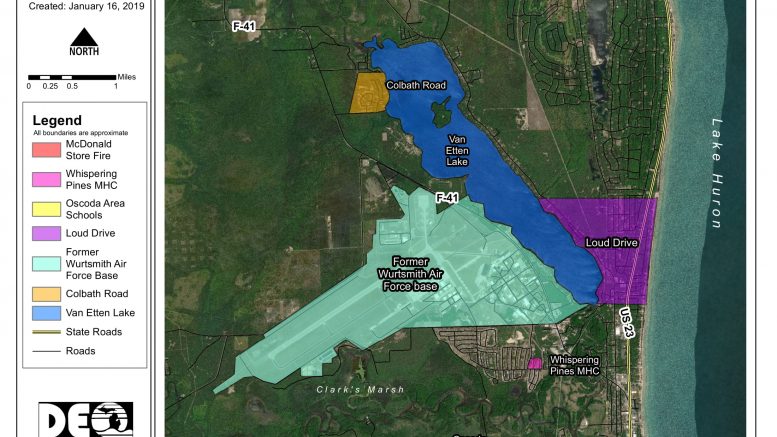 Oscoda Township, MI — The Michigan Department of Environment, Great Lakes, and Energy has confirmed another PFAS contaminated site in Oscoda Township at the former dump.

The site is located on Kings Corner Road between Loud Drive and Poor Farm Road.

According to the EGLE, Oscoda Township was concerned that PFAS contaminated wastes were disposed of in the dump based upon a letter dated from 1968.

The letter stated that waste from the Wurstsmith Air Force Base was being disposed of at the dump.

In December of 2018 the EGLE collected 16 groundwater samples from the perimeter of the dump, and in early January the results confirmed PFAS in 14 of the samples – With three wells showing numbers higher than the standard.

Nine residential wells were tested and none showed positive results for PFAS contaminants.

“The discovery of more PFAS contamination in our region connected to activity at the former Wurtsmith Air Force Base further punctuates the need for the EPA to act and the DOD to step up to its clean-up responsibilities. Every Michigan family deserves the peace of mind of knowing that when they hand a glass of water to their child it is safe. I am proud of our state’s work leading the way when it comes to PFAS detection and investigation. I will continue to support efforts to address this growing issue.”

According to Oscoda Township Supervisor Aaron Weed, there is not much that can be done at this point until the EGLE meets with the township board.