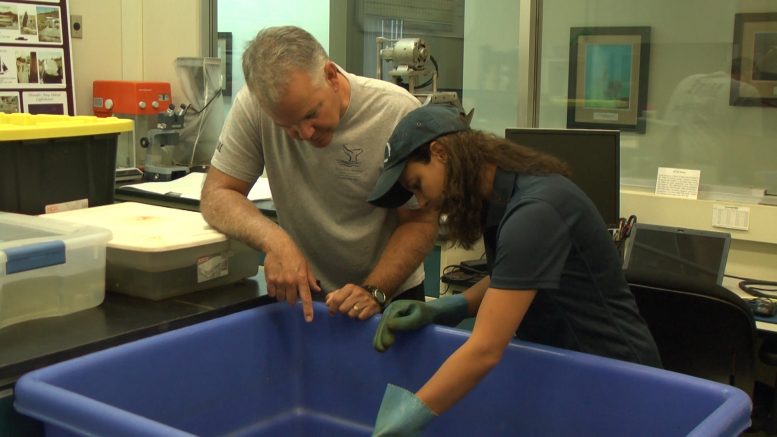 Maritime Archaeologist's Justine Benanty and Wayne Lusardi examine their latest recovery from a WWII plane crash outside of Port Huron.

Alpena — A group Maritime Archaeologists may have come up empty handed in their search for new shipwrecks and plane crashes in the Thunder Bay National Marine Sanctuary, but they didn’t leave empty handed.

“Just being able to be part of a project like this… you know a completely new aspect to my career, I cried in my mask,” said Benanty. “It’s possible to do but you come down and the visibility wasn’t terrific but you just come down and it’s eerie and like I said you can tell it’s the final resting place of somebody.”

Divers discovered the wreck back in 2014, exactly 70 years from the crash. The group needed approval from the Environmental Protection Agency and the Army Corp of Engineers before taking the artifacts out of the lake. The tedious process of mapping and planning began in 2015.

On Friday, the crew began their work. The process took almost 2 days to complete. Once safely removed and put into preserving tanks, the artifacts were transported back up to Alpena for more preservation. The archaeologists will help remove zebra and quagga mussels and write down their observations. The pieces of history will be shipped down to the Tuskegee Airmen National Museum in Detroit.

“You want people to know those things because they can tell their grandkids you know that they saw Lt. Moody’s aircraft wreck in the Tuskegee Museum,” said Benanty. “That’s so cool.”

The specific artifacts and items have not been released yet as archaeologists record data from their recovery.