“Sexual assault awareness month happening each April is really important because it puts a spotlight on survivors. However, putting a spotlight on it does not mean that supporting survivors ends when the month of April ends.” said Sexual Assault Awareness Program Coordinator, Paige Allia 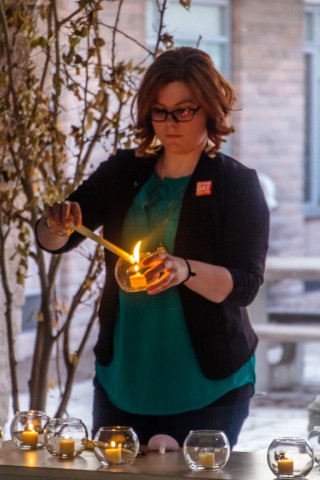 The yearly vigil fell on International Denim Day, which shines light on sexual assault survivors. After a few years of strictly online programming, HSA was eager to have the vigil in person again. “We are really excited to have it in person. It is the first time we have been able to hold it in person in the past couple of years. ” The event had live music, spoken word, and interactive displays. The vigil was a chance for community members to reflect on the importance of the awareness month.  “Talking about the uncomfortable topics like sexual violence is so necessary in order to remove the shame that is carried by survivors and to shift that blame and shame toward accountability. ” said Allia.