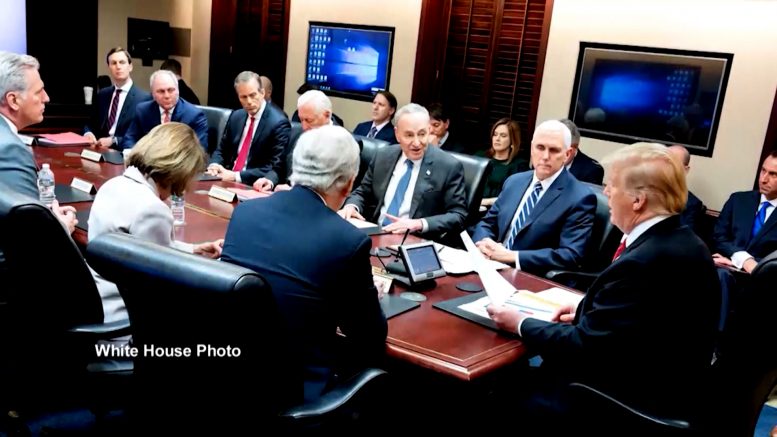 Alpena, (Mich) — As the partial government shutdown continues on, eight hundred thousand federal workers continue to go without pay including quite a few key workers in northeast Michigan.

As the country wraps up day 14 of the partial shutdown, the NOAA Thunder Bay National Marine Sanctuary buildings and U.S. Fish and Wildlife continue to stay closed.

Today the president met with top leaders of both the Democratic and Republican parties. Both parties produced conflicting reports on how the meeting went with the major dispute being funding for the border wall in the south where the president feels strongly on protecting the border. A reporter asked the president how long the shutdown could go on for after hearing reports from the meeting that Trump said it could take months and even years.

The president originally promised that the wall would be paid for by Mexico. That money apparently will come from the new United States-Mexico-Canada trade agreement according to Trump. Lawmakers will continue to work over the weekend to find a solution to reopen the government.

As for the 2019 Thunder Bay International Film Festival which is held at a NOAA building (Great Lakes Maritime Heritage Center), here is what the president of the non-profit group Friends of Thunder Bay National Marine Sanctuary had to say…

“It is our hope that the government will reopen soon, so the sanctuary can continue it’s important work to protect the Great Lakes and their rich history. The Thunder Bay International Film Festival is not only an important cultural and educational event for our community, it is also important economically. The Friends of Thunder Bay are working on a contingency plan for the festival if it looks like the shutdown will not be resolved in time for the event. On behalf of Friends of Thunder Bay National Marine Sanctuary, we appreciate the communities enthusiastic support in helping to grow the festival each year and ask everyone to stay tuned for future updates.” -Chuck Wiesen President Friends of the Thunder Bay National Marine Sanctuary