High temperatures today reached the lower 50s near the shoreline, where cooler temperatures were produced by winds coming directly off of Lake Huron. High temperatures farther inland got close to 60 degrees. Cloudy skies persisted all across Northeast Michigan, at least some clearing is expected early tomorrow. 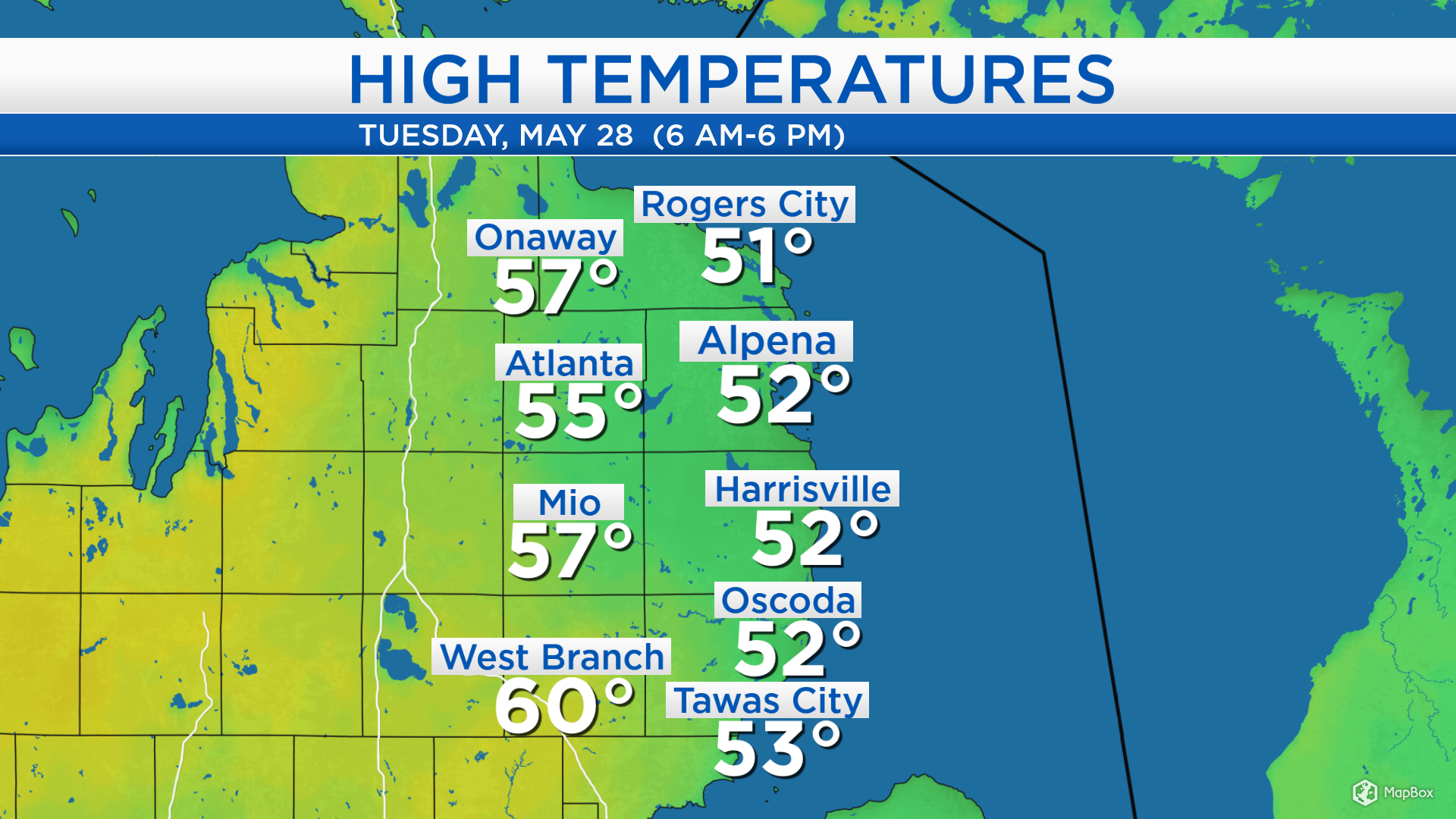 Severe storms have been staying to our south, extending from Pennsylvania to Kansas. A storm system over the Rockies could give us a few isolated showers/thunderstorms tomorrow afternoon, although mostly dry weather is expected. Plenty of sunshine will appear for the end of the week.

Low temperatures overnight will drop to the middle 40s. Moisture trapped in the lowest levels of the atmosphere combined with nearly calm winds could produce fog overnight. Any fog should dissipate tomorrow morning, then partly cloudy skies are expected. In the afternoon, there is a slight chance for an isolated thunderstorm. Winds shifting out of the south will bring warmer temperatures, close to 70 degrees. Temperatures will remain mild tomorrow evening, near 60 degrees with partly cloudy skies. 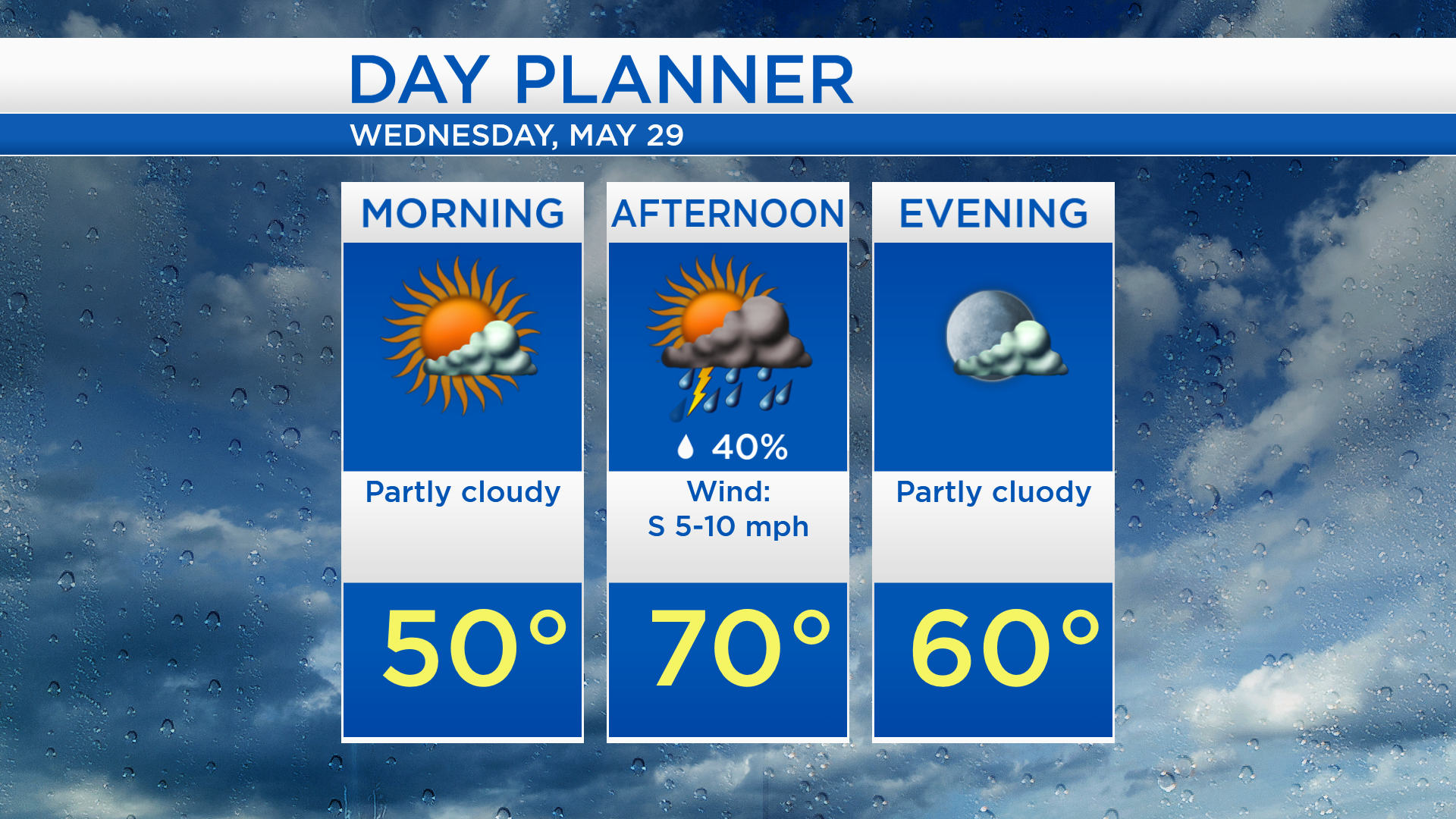 Out on the water, waves will calm down tomorrow, settling close to 1 ft. Most of the day should be dry with air temperatures in the lower 60s but note the slight risk of afternoon thunderstorms. 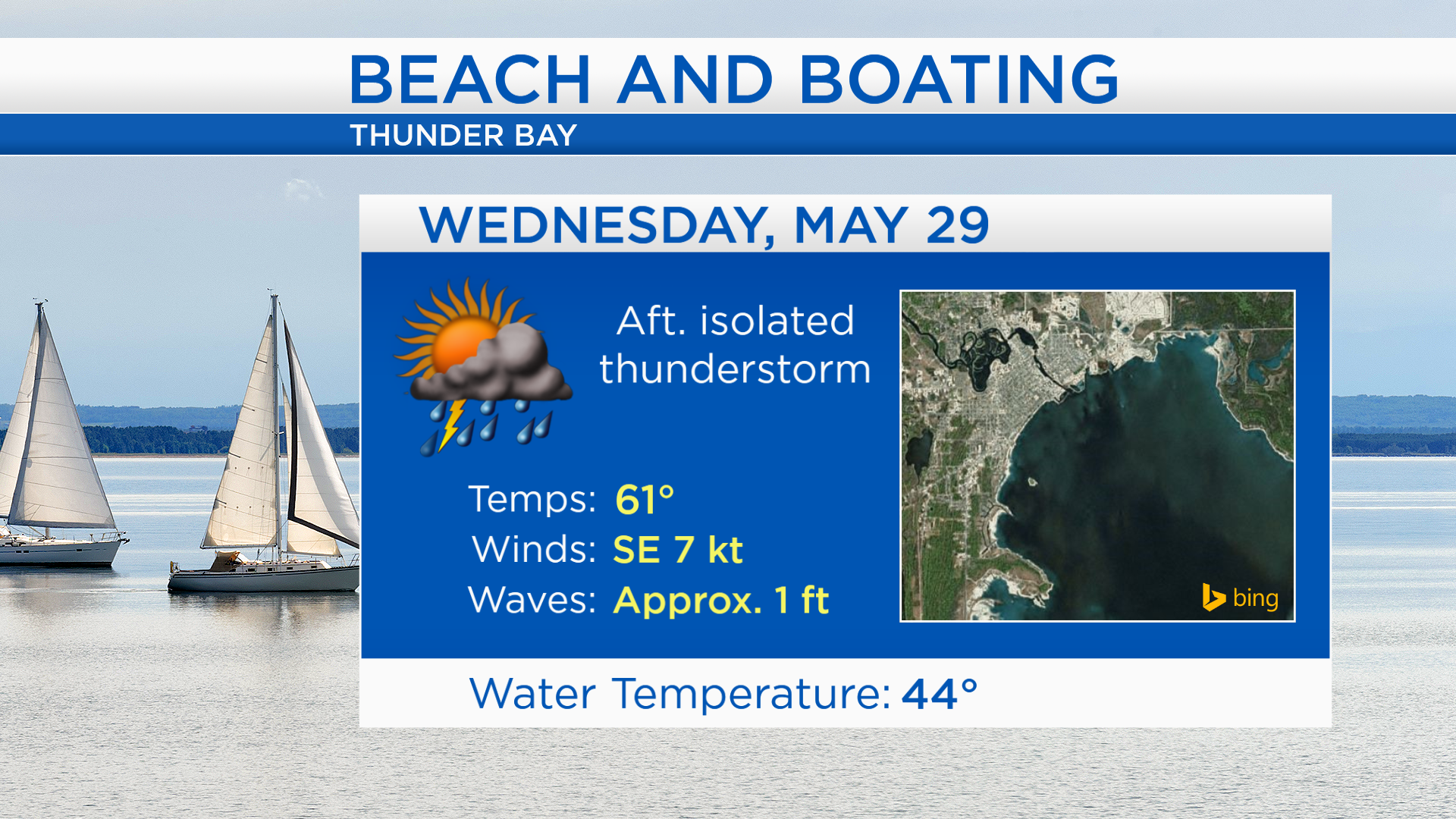 The chances of showers this week are generally low, but the most notable chances of any showers will occur tomorrow afternoon, then late Friday night to early Saturday. 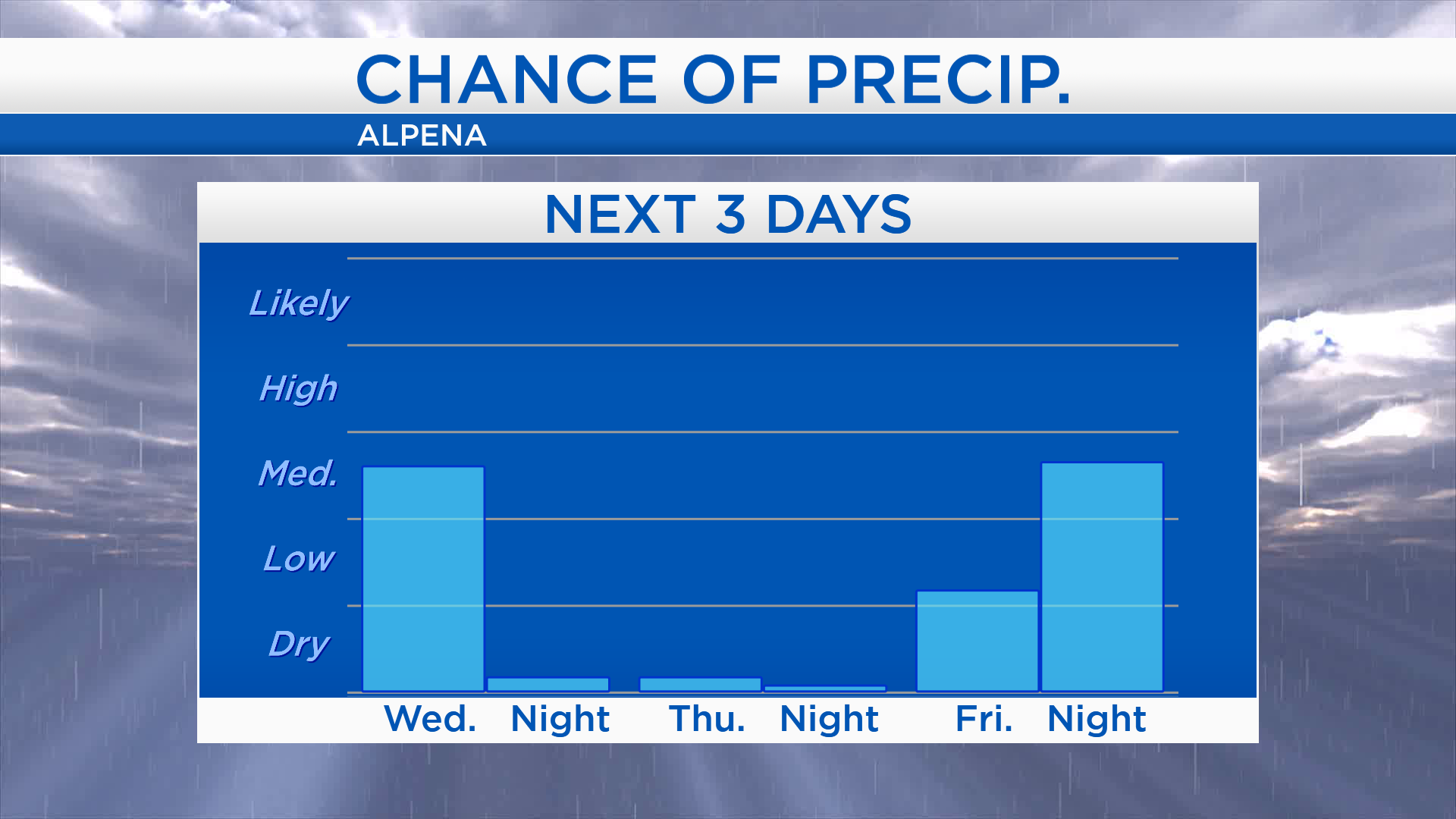 Temperatures tomorrow afternoon will reach 70 degrees away from the shoreline. Mostly sunny skies are expected Thursday with early-morning temperatures in the upper 40s and afternoon highs close to 70 degrees. Highs in the upper 60s and bright weather are forecast for Friday. The next chance of showers will arrive late Friday night/early Saturday, although the majority of the weekend should end up dry. For the rest of Northeast Michigan’s weather forecast, watch the latest weather video by clicking the weather tab at the top of the page. 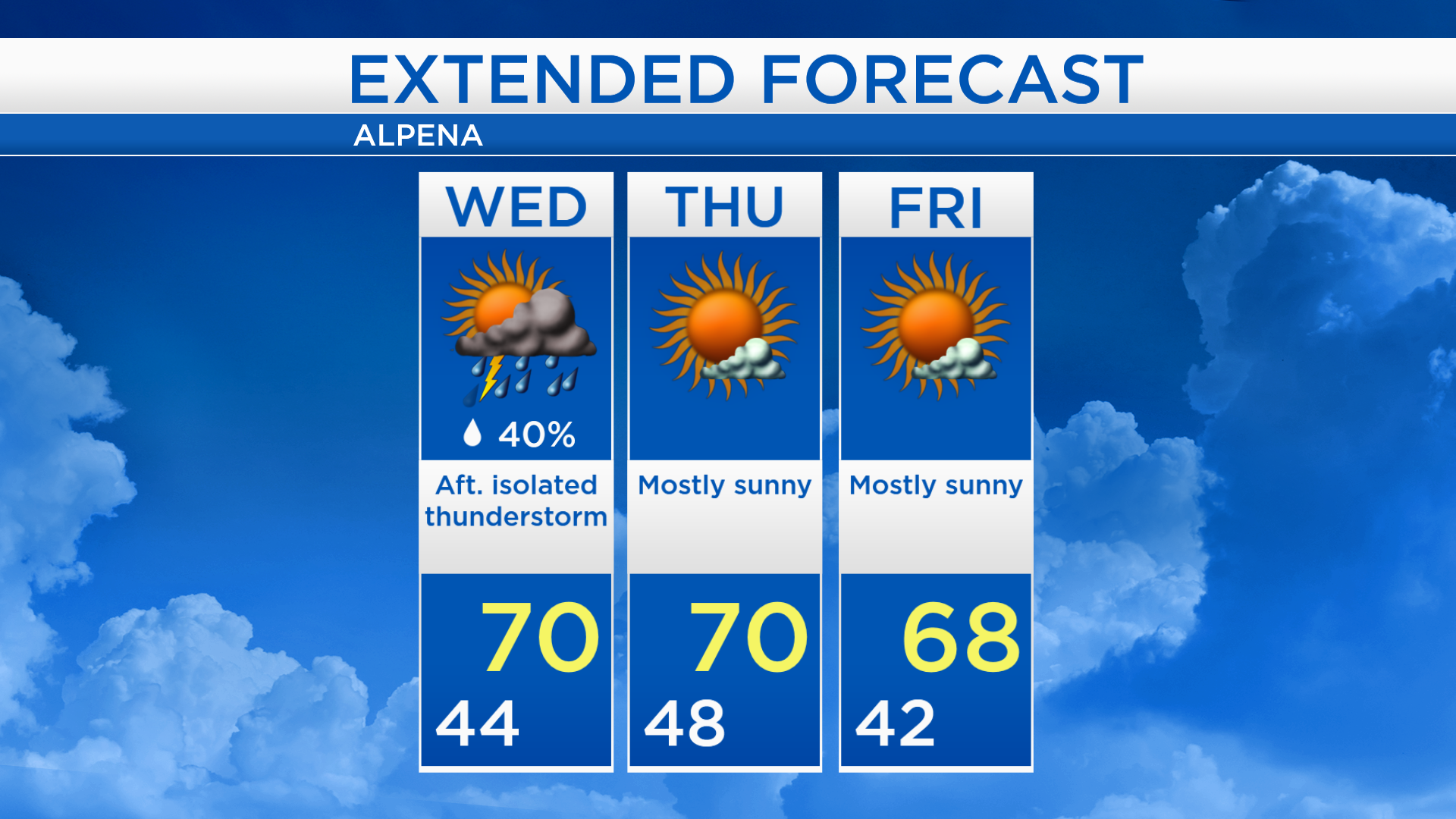