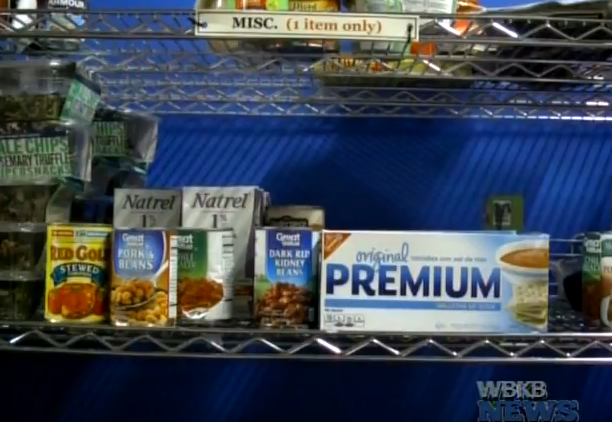 There was a friendly competition between employees from Alpena County this week to help donate non–perishable food items to St. Vincent DePaul food pantry.

What’s wrong with a little friendly competition especially if it’s about love?

The competition, “Have a Heart” was between union workers from the Police Officers Association of Michigan, The Technical Workers of Police Officers Association of Michigan, and The Government Employees Labor Council against non-union workers, and department heads to see who could collect the most non-perishable food items to donate to the St. Vincent DePaul food pantry.

Organizer, Catherine Murphy said the county was inspired to give back to the community following Valentines Day.

“Back in December our union, the local T–POAM, and the Division of POAM decided that we wanted to do something for the community, but everyone does something for the community at Christmas time…between Christmas and Thanksgiving. So we decided that we would wait until after the first of the year and we would include all of the other unions and the non–unions with the county and so we named it ‘Have a Heart’ and had it Valentines Day doing a friendly competition. The union won,” Murphy said.

The emergency food pantry at St.Vincent DePaul feeds over 1,200 families a month. Assistant Manager of St. Vincent DePaul, Hope Ludwig said it’s amazing how the community steps up when people are in need or in a crisis.

“The way that I look at it, is if you know if I’m in a situation where I can afford to buy a couple extra cans of food or extra boxes of cereal when it’s on sale, I can do that for my community. Because what if I was on the other end of the receiving where I couldn’t afford to do that because working here at St. Vincent DePaul I see that. It’s a great need in our community for some extra food just to get them through a crisis or no job, things like that. So I feel it’s awesome for our community to help in that way, when they can help and however much they can help,” Ludwig said.

“We live in such a great community, everyone support us, and we just want to extend that thanks out to our community. We really appreciate it. We wouldn’t be here if it wasn’t for our community,” she added.

The Alpena County workers were able to raise a total of 700 non–perishable food items for the pantry.