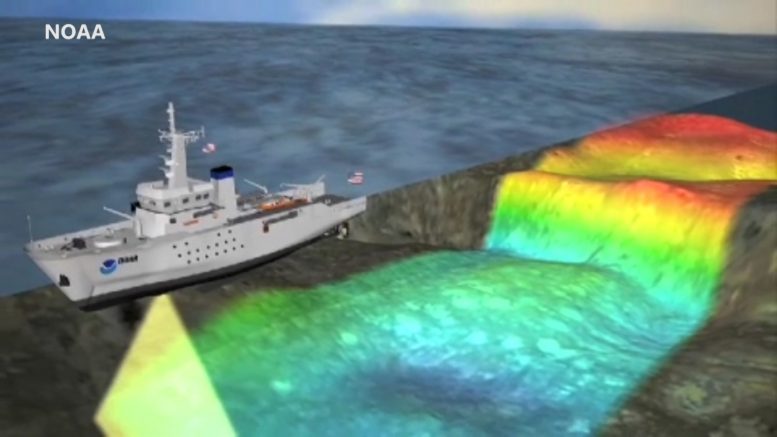 Wednesday marked day one for the two week research mission.

“We’re going to an area that hasn’t really been explored,” said marine spatial ecologist Charlie Menza. He will use a side scan sonar system to map the lake’s bottom floor on NOAA’s Storm boat. The area he’s boating to is about 60 meters deep beyond the Bay.

“A lot of Great Lakes were mapped before the 1950’s,” he said, “so the data is very old.” The underwater scanner will refresh previous research with better images.

Hydrographer Brent Johnston said, “It spread lots of individual beams out.” The invisible beams represent sound waves, but you can see them on a computer monitor. Darker colors mean deeper waters. Once sound goes out, Johnston will watch for acoustic sounds to bounce back “to get very precise measurements from the distance between the multi–beam sonar and the lake floor.”

This research is important to the National Marine Sanctuary for two reasons. First, NOAA can find sunken vessels. Storm boat Captain Travis Smith said the team found two new shipwrecks a year ago on a different ship. Second, researchers aboard want to understand the quantity and quality of fish habitats.

“That’s kind of the goal,” said Smith, “to do one survey and have it useful to as many people as possible.”