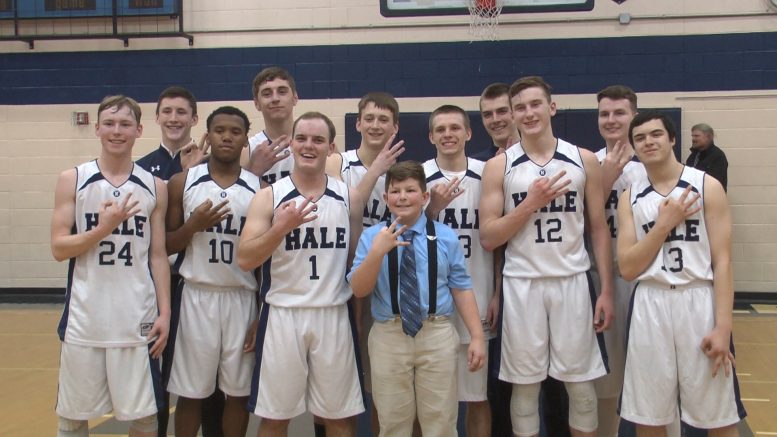 Hale, Mich. — The Hale Eagles entered Tuesday nights matchup at home against the Posen Vikings looking to get their third consecutive North Star League-Little Dipper Title. The first quarter was a battle that Hale ended on a high note with a Joseph Kimmerer buzzer-beater three-pointer for the 11-10 lead.

Posen answered with a quick three of their own in the second by Mark Wisniewski to steal the lead, but that’s when Eagles’ big man Garrett Beebe took control of the paint. The junior totaled 14 points and 16 rebounds helping Hale get out to a 30-13 lead at halftime.

The Eagles knocked down 52 percent from 2-point range and 36 percent from behind the arc, including this third quarter buzzer-beater again by Kimmerer. Hale goes up 51-38.

“They were definitely dropping for all of us,” said Kimmerer. “We were all having a great game. Everything was just clicking for us and we put maximum effort.”

The Eagles topped the Vikings 70-56, improving to (15-4) overall and (10-3) in the Little Dipper. This marks the first time in school history that Hale has won the title three years in a row.

“It’s a great feeling knowing that we’re out here and we can support that,” said Thorne Sauseda. “We’re able to go into a district with our heads held high and with momentum.”

Hale will face Au Gres-Sims for the first round of districts on Monday, February 25th at 7 p.m. in Atlanta.

Domke finishes with 18 points in win over Inland Lakes