Of the 59 graduates from the 142nd trooper recruit school, two of them landed at the Alpena post. Troopers Logun Carlson and Brett Immel had their first day on Monday. Becoming a trooper is something both of them knew they wanted to do with their lives. “I’ve always wanted to help people,” said Carlson. “People don’t call the police when they’re having a good day, they call when they’re having a bad day, and being able to be there and help people on their worst days is all I wanted to do.” 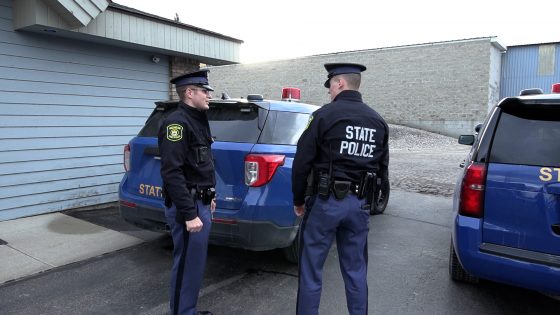 Trooper Carlson is a second generation member of the Michigan State Police. His dad Rick was perhaps the biggest influence in why he wanted to join. “He was absolutely my full influence, watching him growing up helping people,” Carlson said. “Whenever people needed anything, they would always call him and that’s always inspired me.”

Trooper Carlson is coming in from Petoskey. He knows northern Michigan and, for him, it’s a great opportunity to serve the community he loves. “It’s absolutely huge,” he said. “Northern Michigan is such a close knit community, and knowing people are out there to have our backs.”

There’s 20 weeks of training graduates need to get through in order to become a Michigan State trooper. Including Alpena’s newest arrivals, there are now 1,192 hundred troopers assigned to areas across the state.