There will be three goose hunts this month in Alpena on September 8, 15, and 22.

While there are other methods besides killing the geese that have worked, according to Alpena County Commissioner Don Gilmet, hunting is the most efficient. Using dogs, decoys, or sirens usually isn’t a permanent solution. “The geese are going to go somewhere when they leave,” he said. “They’re not going that far. Maybe they go to the high school, maybe they go to the junior high ball fields, or McRae Park. This is one way to reduce the population that has a lasting effect.” 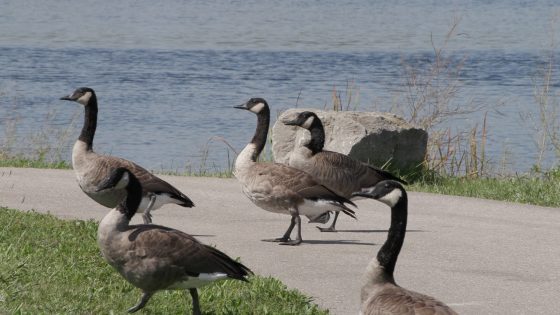 The mess the geese leave behind could prove harmful to pets and even children while they walk through the grass. That’s especially true this year considering there have been cases of avian flu spotted in several geese in Michigan. “It doesn’t wipe the geese out like it does to some of these chickens, but if you come in contact with goose feces from an infected goose, you could potentially carry that back to your home if you’re a farmer and your chickens or pets,” Gilmet said.

There are some in the community that don’t support the goose hunt, but Gilmet wants to stress that none of the geese they shoot go to waste. They are either taken by the hunters or donated to almost anyone who asks for one. “It’s hunting,” said Gilmet. “They’re wildlife and it’s as beneficial to them to have the population reduced, more manageable, to limit disease as it is for the health and safety of the human beings that cohabitate with them in our area.”

The hunts will take place at the Alpena County Fairgrounds and Michekewis Park. Those areas will be closed off to the public from sunrise to 1 p.m.

Alcona County Commissioner Looks to Ease Tension Between Board, Veterans