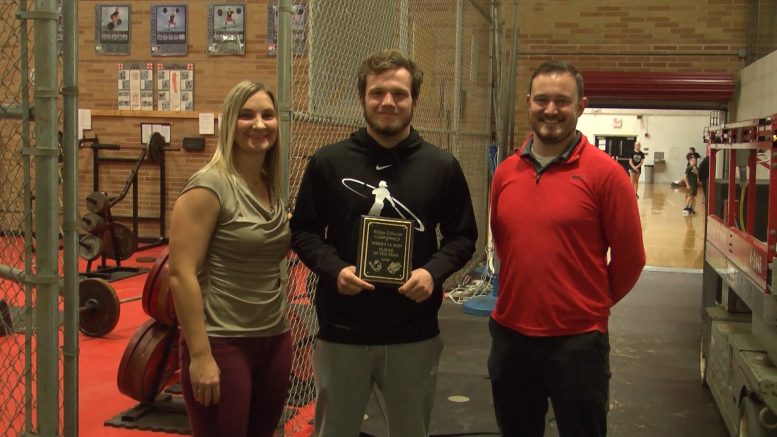 After a great 2018 Northeast Michigan football season, coaches and WBKB sports staff voted and picked a top 8-man and 11-man player of the year.

Whittemore-Prescott’s Ridge Schutte earned the top 11-man player award. The senior running back rushed 243 times for 1,958 yards and 22 touchdowns and caught nine receptions for 51 yards and one touchdown, all in eight games played. On defense Schutte contributed 90 tackles, 7.5 tackles for loss, one sack, one interception and one kick blocked. A great season for the senior.

“I’m going to miss the brotherhood here at Whittemore,” said Schutte. “It’s crazy how we all just get along, all the coaches get a long and there’s always just a history of Whittemore–Prescott football that always makes it work harder and keep going.”

Other teams and coaches had to plan their game strategy around Schutte when facing the Cardinals.

“I hope someday I get to coach another kid as good a football player as Ridge Schutte,” said Head Coach Tommy Atkinson. “Those don’t come around everyday.”

Au Gres-Sims’ Caden Zeien was awarded WBKb’s top 8-man player of the year. The senior helped the Wolverines get their first playoff victory in school history and advance all the way to the state semifinal where they lost to the Pickford Panthers. Zeien completed 118-193 passes (61%) for 2,125 yards and 36 touchdowns. The Wolverines through four interceptions, all in playoffs. On defense, the senior contributed 11 solo tackles, 25 assists, four sacks and one fumble recovery. Zeien overcame a degenerative spinal disease in middle school where he has surgery and had to re-learn to walk. A great way for Zeien to end his senior season.

“I’m going to miss it more than anything else in the world,” said Zeien. “It was something special with this group of guys I’m never, ever going to forget.”

Caden’s coach and father Chad Zeien is proud of the obstacles he had to overcome.

“It’s rewarding. It’s neat. It’s been a lot of trials and tribulations,” said Coach Zeien. “A lot of ups and downs, but very rewarding to see the success he’s had in his senior year and a lot of things that are much deserving.”