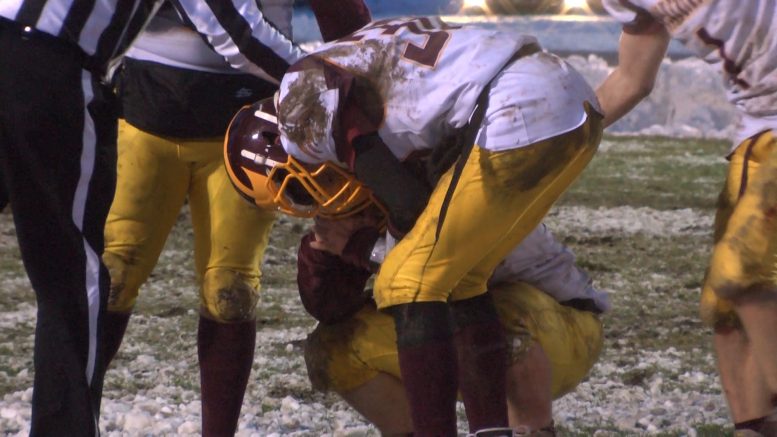 Pickford — The Au Gres-Sims Wolverines football team made history for their school starting with the first playoff victory in 13 attempts. Then the Wolverines earned their first regional final trophy, landing a spot in the state semifinals. Au Gres-Sims (11-0) traveled up north in the UP to battle the Pickford Panthers (11-0).

The weather was rough and volunteers had to shovel the field to make it playable for the big playoff game that started at under 30 degrees. Once the game kicked off, the Panthers got a hot start. Junior quarterback Jimmy Storey scored on a quarterback keeper, putting the Panthers up 6-0. Then Au Gres-Sims had their chance, but senior Caden Zeien threw a pick six to Pickfords’ Isaiah May putting the Panthers up 14-0. Storey would later find Sam Burton for a long throw and catch to give the Panthers a 36-0 lead. It did not help that Wolverines’ star senior running back Ryan Schwiderson popped his knee in the first quarter.

Wolverines would answer with less than 3 seconds in the half. Caden Zeien zipped a bullet to Zander Forton, and the Panthers entered halftime up 36-6. Au Gres-Sims kept fighting. Fletcher Forton came up with a pick six to put the maroon and gold down 36-14. Zeien later connected with Ben Salgat for a 21-yard touchdown pass on third and 11, but the Wolverines fell short to the Panthers 50-20 ending their school’s first ever playoff run.

“They put some pressure on us,” said Head Coach Chad Zeien. “Weather, I don’t know if it made a difference or not. We both had to play in it, but just a little bit off today and it wasn’t just a little abnormal. About the first time all season we have seen it, but the kids played great and hard right till the very end.”

The Wolverines ended their season (11-1).

The 5th Down – Week 9 Highlights