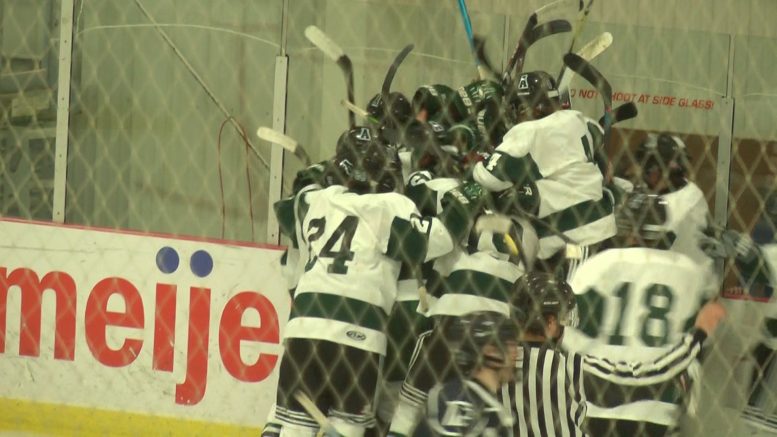 The first period was all defense. Cooper Black saved four shots on goal. He saved 18 total for the night. The second period started all the action. Alpena on a power play with 5:53 left in the second, Anthony Berg fired from deep and Alex Cosbitt chipped in the puck for his third goal of the season. Cooper Black would save nine more shots on goal and Alpena would lead 1-0 after the second.

The Cougars did not go down without a fight. Dakota goes with the empty net with 2:00 minutes left to play. Alpena’s Colby Plowman on a fast break, was stopped by Macomb Dakota’s diving save. Then the Cougars carried the puck and Lucas Czopek scored with 56 seconds left to play. This game went to sudden death overtime. Cooper Black saved some key shots, and Wildcats on a power play goal put the game away with another tap in by Cosbitt for the go-ahead 2-1 victory. The Wildcats are now (7-1).

“You know it was just awesome,” said Cosbitt. “The crowd was amazing tonight. So loud. All of the students were here. Everyone around town, so when I saw it go in I was just so excited.

Cooper Black saved 18 shots for the night, but wasn’t happy with the goal that got away.

” Kind of a bad goal with 58 seconds left, so I had to make it up to my team and help them out. They for sure helped me out with that overtime goal with Alex getting that tip. Overall just did a really good job.”

Coach Chris Limback said Black will get the day off on Saturday when the Wildcats face the Cougars at 1 p.m.

“They’re going to come back with it again. They want to leave here with a split, so will really be a good test. Can we turn it around? Can we match their intensity and speed tomorrow? It will be a great test to see where we are at.”