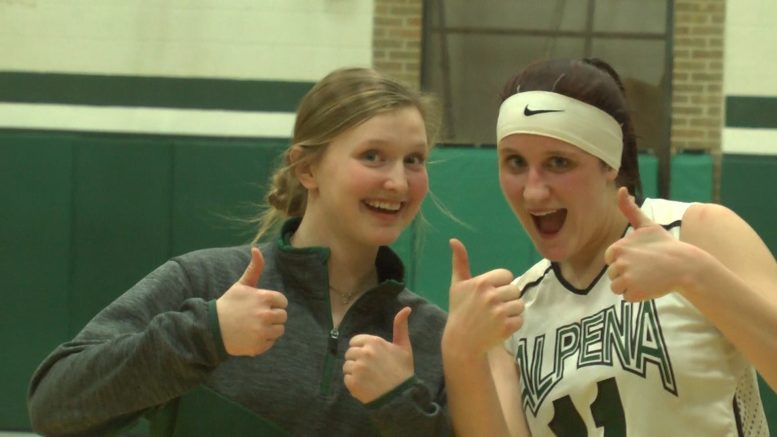 (L to R: Allie DeRocher and Jade Schultz) Wildcats get revenge on Cheboygan.

Alpena, Mich. — The Alpena Wilcats caught a break from the Big North Conference Tuesday night at home against Cheboygan. The Vikings entered the match (1-11). Their only win was over Alpena 41-40 on a buzzer beater early in the season.

The Wildcats started off hot with a (10-0) run and two first quarter three-pointers by Abbie Funk, but the Vikings attacked back and tied the quarter at 11-all. The green and white’s junior Jade Schultz knocked down her first career three-pointer in the second quarter, but the scored remained close as the Wildcats entered haltime with a three point lead.

Alpena did not pull away until the third quarter, five different players contributing, outscoring Cheboygan 15-6 and taking the 44-32 lead. The Wildcats would only make 3 of 8 free throws in the fourth quarter, but their defense helped secure the 54-42 victory improving to (6-6) overall.

Up next Alpena takes on Traverse City West on the road Thursday, one of two teams ahead of the Wildcats in the Big North Conference.

The Funks will continue their softball careers at Spring Arbor University

Alpena dethrones the king of the North