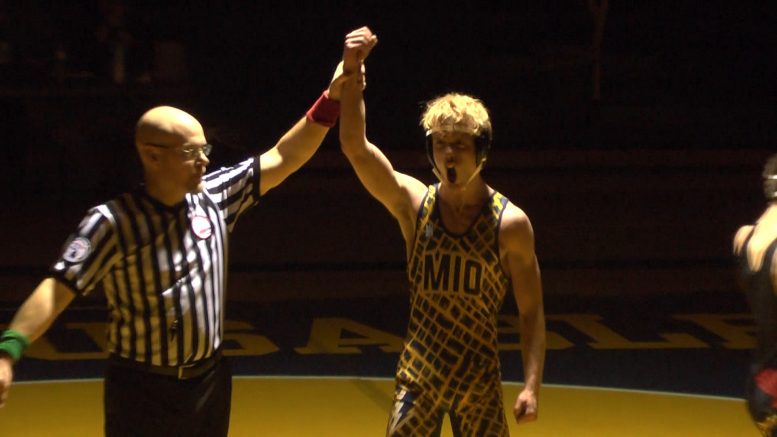 Tristen Antkowiak celebrates a victory during Mio's match against Whittemore-Prescott.

MIO, MI — The Thunderbolts, Hurons, and Cardinals met up for a wrestling match that didn’t disappoint.

The Hurons saw strong performances from Caden Fenstermaker and Clayton Henry against Whittimore–Prescott, but ultimately lost the match 48–18.

Rogers City had a quick turnaround between matches as Mio set the mood with a solo light over the ring.

Henry won again in his match against the Thunderbolt’s Pete Socia and also saw victories from Anthony Paul and Austin Bielas.

Even with the improved performance, the Hurons couldn’t get past Mio and fell 53–27.

I caught up with Henry following his 2 win performance and asked about his plans for the rest of the season.

The match of the night was between the Bolts and Cardinals.

Both Schutte and Mio’s Will Ciske defeated Huron Dylan Dowgherty and the 189 pound match up didn’t disappoint.

With Schutte leading 11 points to 5 in the third, he managed the pin and secures career win 154.

“It’s pretty cool getting 154 wins. My goal, coming in through high school, was 200. But, not everything can go as planned or as you want it to. So 154 so far is pretty good with about 30 matches left to go,” Schutte said.

The other big match came between Mio’s Tristen Antkowiak and Whittemore’s Devan Nadar.

The 130 pounders countered each other move for move, but Antkowiak edged Nadar in a 6 point decision.

“I mean it was really intense, like the kid had skill and he brought his all for the match and the only thing I could do was bring my all to the match. I expect we should have a great season. Like if we keep working as hard as we are now, we should get better come districts and be able to beat Whittemore,” Antkowiak said.