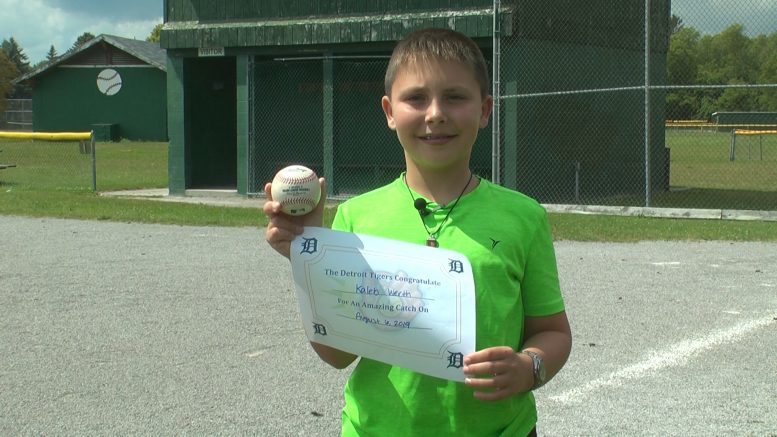 Alpena seventh grader Kaleb Werth made the catch of a lifetime at Comerica Park. (08/06/2019)

ALPENA, Mich. — Fans dream of going to ballparks and catching a foul ball or home run, but there’s a strategy to this madness. Sitting in certain sections can score fans more chances, and one Alpena family made the right call when picking their tickets.

Alpena seventh grader Kaleb Werth made the catch of a lifetime, landing his highlight on the big screen at Comerica Park on August 6, 2019 when the Tigers faced the White Sox. It happened in the top of the ninth when Chicago’s Jose Abreu hit a foul ball pop up to the stands.

“I was going oh geeze I don’t want to get hit in the head,” said Werth. “Oh am I going to catch it?”

He did. Werth even received some praise from a Tigers legend.

“Watch this. He’s paying attention,” said Gibson. “Oh that was a good snag. That’s a highlight.”

Did you see that catch! 👀 Can you believe Kaleb Werth has never played baseball? He'll probably get recruited. Werth is a seventh grader from Alpena, Michigan and he chose a great day to bring a glove to the @tigers game. Good camera work by @FOXSportsDet. #MotorOn @WBKBSports pic.twitter.com/STk5DzQLio

A special moment for Werth’s proud father Keith, especially since his son has never played baseball.

“When I grew up and stuff, was a big fan of Kirk Gibson,” said Keith Werth. “So to hear him give him some praise on the actual ballgame itself, about it being a highlight reel catch that was awesome for me.”

Kaleb was not the only one who brought home a ball, so did his dad and younger brother. In fact, Kaleb gathered two balls by himself.

“It was going right at my wife,” said Keith. “She was on the phone and I caught the ball and then I looked at her and stuff after everything calmed down and I said how come you didn’t move out of the way. She said I trusted you to catch that ball.”

The Werth family received certificates for each ball, and Kaleb is putting his in a special place.

“I’m going to put it right on my bed. Right next to all of my others. A collection going on there.”

For all of the coaches out there, Kaleb’s dad had this message.

“We’ve got O’Dell Beckham Jr. over here and stuff that can catch the ball, so if anybody needs a recruit we’ve got him.”