ALPENA, Mich. — The Water Warriors took on Lake Huron for the 29th annual endurance ride. The group joined together in 1991 believing they could overcome the obstacles of Michigan’s vast waterways and weather conditions. Over 25 personal watercraft riders accompanied by three support boats with spotters aboard and a fleet of land support vehicles made up the 75 members participating in this year’s ride.

The torch of freedom marked the start to one of the toughest parts of the trip for the Water Warriors, and Special Olympics athlete Aimee Faggion arrived to cheer on her heroes.

The 65-mile watercraft ride from Rogers City to Alpena was only half of the first days trip. Part of a five–day, 450–mile endurance ride that began 29 years ago. The Water Warriors’ journey started in Mackinaw and ends in Algonac. Kristine Nowak gave a funny response to her favorite part of the ride.

“Coming back in. I’m not going to lie, it wasn’t too bad. The rollers are my favorites though.”

The Water Warriors brought sports anchor Larissa Liska along for the ride, which started onn the boat from Rogers City to Presque Isle Harbor, and then embarking to Alpena on a PWC. At times the water looked like glass, then full on rain felt like hail stones. When it was choppy in Thunder Bay there were 10-foot wakes , and they were fun to jump. 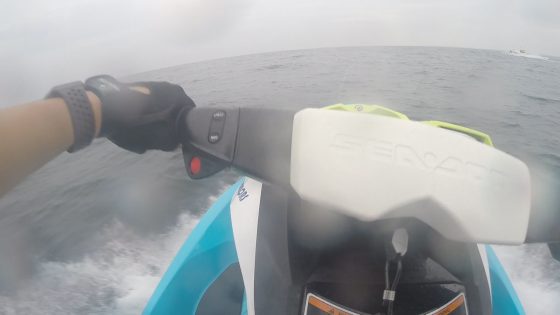 “Going through that just puts it into perspective. Kind of what they go through,” said Nowak. “If they can do what they do everyday, then I can do that for ten minutes and be completely fine. Knowing that they’ll be at the end at some point in each of the days makes it so worth it.”

“What I had seen over there looked like little ants coming in, and I was like wow that’s pretty cool,” said Seres. “You know it makes me happy when I do Special Olympics.”

The Water Warriors raise money to support the inclusive sports programs of Special Olympics Michigan. Since 1991 the team has raised over two million dollars, and every year, rain or shine, the water warriors ride for them.

“The obstacles that the Special Olympics athletes go through everyday in their life could be you know intellectual disabilities and trying to get by in life,” said Chairwoman of Water Warriors Ann Plegue. “Also, there are a lot of physical disabilities that go along with that. Just striving to be their best.”

That’s what makes this ride so special.

“It’s amazing what they do for us,” said Faggion. “It’s just really amazing.”

The Water Warriors look to raise $150,000 towards Special Olympics Michigan. Donations can be made here at https://www.firstgiving.com/event/somicivic/Water-Warriors-Mackinaw-Ride.