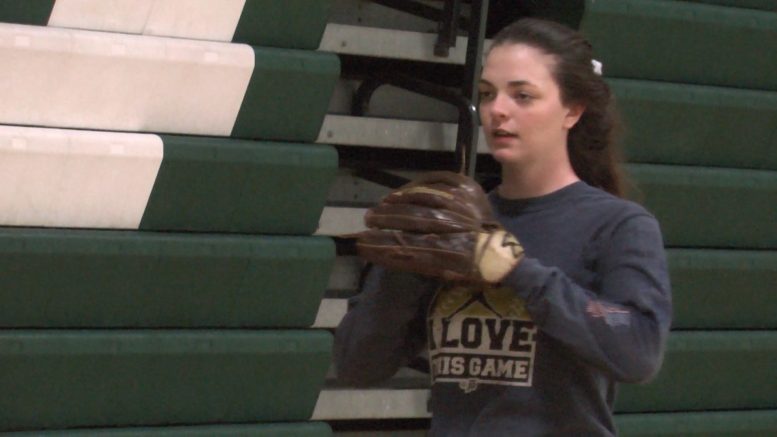 Alpena, Mich. — The Alpena Wildcats are hungry for a deep playoff run after getting a taste of the State Quarterfinals in 2018. The Wildcats return ten experienced athletes to the roster, including their two pitchers Jade Schultz and Emma Fraser.

“Our pitching staff is amazing. They really are,” said Allie Funk. “They have experience, they know what they are doing and they know the game.”

The green and white’s depth charts are stacked this season, and the Wildcats believe they have a chance to go all the way under Head Coach Paul Marwede.

“People are more aware of what’s going on,” said Fraser. “Make the right play at the right time. Definitely defensively.”

In 2018, Alpena won their eighth straight Big North Conference title and they have the chance to extend the streak with their experience starting with junior catcher Allie Funk. Her twin sister Abbie adds awareness at second base and Allie DeRocher and Dayna LaBell  provide speed in the outfield.

“Great arms, great feet,” said Fraser. “I just feel like we’re going to cover a lot of ground. We’re going to make a lot of plays.”

The Wildcats open the season on Saturday, April 6th against Swan Valley High School in Saginaw.

Emma Fraser (Senior Pitcher/Infielder)
The senior pitcher will take her talents to Alma for college ball, and she won’t be leaving Alpena unnoticed. The senior starts the season three runs shy of the school record at 125 set by Lisa Preuss (2002-04). Fraser is also chasing Christen Sobeck’s career hits record of 162 (1999-2001). She is ten hits away. Fraser is tough on the mound as well.
Jade Schultz (Junior Pitcher/Infielder)
The pitcher led the Wildcats on the mound to the State Quarterfinals in 2018. She’s tough on the mound and at bat. Expect the slugger to hit a few dingers this year.
Allie Funk (Junior Catcher/Outfielder)
Funk provides three years of varsity experience behind the mound. She’ll make stops at home plate, and when she’s not catching Funk adds speed in the outfield.
Dayna LaBell (Senior Catcher/Outfielder)
The senior is quick in the outfield and she is great at tracking the ball in flight. LaBell was a strong asset in the State Quarterfinals on defense.
Abbie Funk (Junior Pitcher/Infielder)
Funk’s main role is at second base, and she does not let many grounders bounce past her.