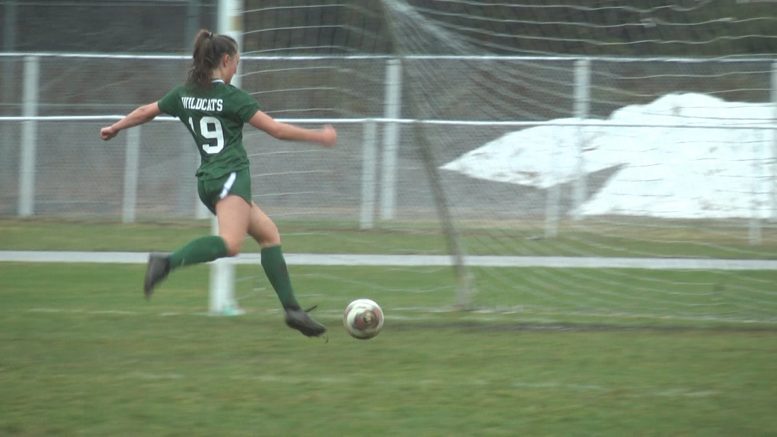 Alpena's Anna Young scoring one of her two goals against Traverse City Central.

Alpena, Mich. — The Alpena Wildcats hosted the Traverse City Central Trojans for a Big North Conference girls soccer opener. It was a muddy, rainy game, but players still found a way to score. The Trojans came away with the 6-4 victory.

Junior forward Anna Young scored two goals, one in each half. Alpena added another goal on a penalty kick by Mollie Girard. The Wildcats’ third goal was a team effort. Kennedy Kaiser hit the corner kick, Girard got the header and Sarah Campbell tipped it in.

The Trojans dominated in the second half behind Northwood University commit Anna Wuerfel. Alpena Head Coach Tim Storch was frustrated that the ladies did not execute all plays or capitalize on chances.

The Wildcats have a chance for redemption next week on the road against two tough BNC opponents, Gaylord on Tuesday at 7 p.m. and Cadillac on Thursday at 7 p.m.

Alpena vaulters can win state despite lack of equipment