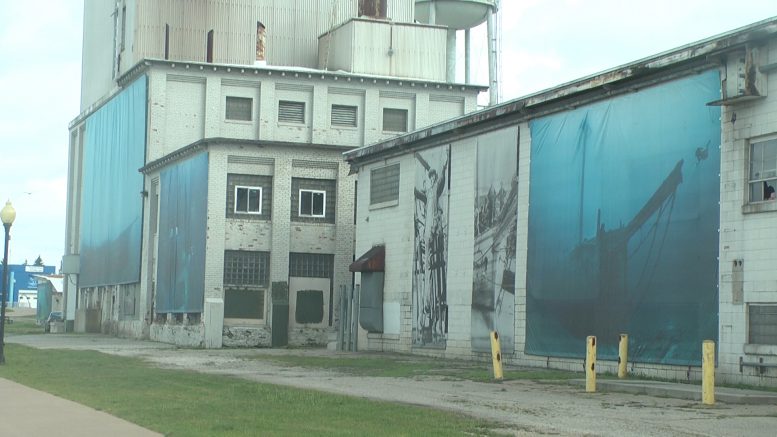 Alpena — It’s a feeling of ‘mission accomplished’ for the Thunder Bay National Marine Sanctuary and the Downtown Development Authority. The second phase of installing and funding large shipwreck facades off the Thunder Bay River has officially been completed.

“This is bringing the stories of the shipwrecks to the people,” said Thunder Bay National Marine Sanctuary Media Coordinator Stephanie Gandulla.

Colored images of shipwrecks and divers cover much of the abandon Fletcher buildings. The project started back in May with the Sanctuary applying for a grant opportunity offered by the DDA. The sanctuary planned to add a number of colored images off the Thunder Bay Maritime Heritage Trail, complementing the black and white shipwreck ‘skrims’ that were installed five years ago. With the Fletcher buildings deteriorating, creating an eye soar for the downtown, the leaders of the sanctuary took it upon themselves to beautify the area.

“Whether it’s a historic based project or something like the marine sanctuaries where the skrims were installed where a full renovation wasn’t possible, you know either way they beautify the downtown,” said DDA Director Anne Gentry.

The shipwreck facades offer a number of added benefits. First, they help people see shipwrecks that are extremely difficult to reach, usually a challenge for technical SCUBA divers. Second, Alpena Shipwreck Tours passes right along the images, so they make great talking points and add to the experience.

“I’m not a diver, I know a lot of other people aren’t so being able to see what the sanctuary promotes and preserves is really cool,” said Gentry.

Funding for the project started with the Thunder Bay National Marine Sanctuary and Friends of the Thunder Bay National Marine Sanctuary. Both parties covered the original cost, over $10,000. The DDA provided grant funding once the project was completed. The goal is to encourage more businesses to take part in beautification projects and utilize grant money from the DDA to help offset some of the cost.

“I think everybody’s doing such a great job with the flowers and maintain their grounds and putting up beautiful signage and imagery so we’re kind of a part of that whole pride in Alpena,” said Gandulla.

Photo of the Day for Friday, March 1