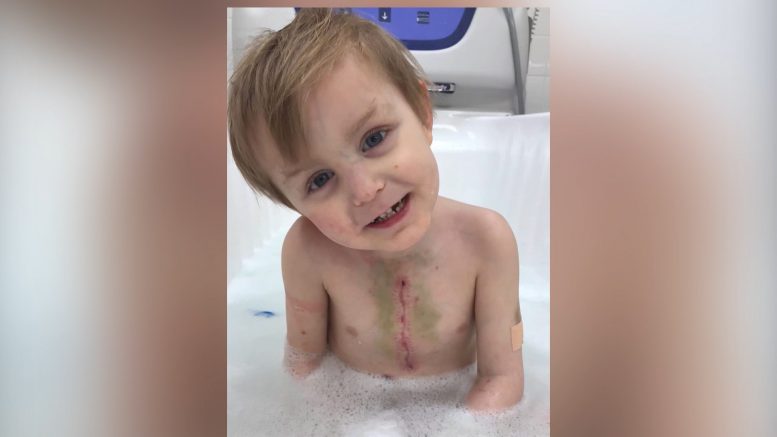 ALPENA, Mich — The holidays are known as a time of happiness and joy, but for some families, the obstacles from earlier parts of the year still have to be faced during the season. That’s been the case for Lucas Sami’s family, as they await a heart transplant for the five year old.

Lucas’s mom, Miranda Reed, says she’s been scared for her son’s life since his condition began to worsen.

“We were all getting ready to go see him, and they’re like, ‘his blood pressure disappeared.’ Which, in other words means he flatlined.”

Lucas looks like a normal, healthy boy, but his family is constantly watching for symptoms of his heart condition. Reed says,

“The right side of his [heart] valve was twice the size of his left, and it pumped backwards, back into his heart, instead of out to his body.”

As a result, Lucas has spent countless days in the hospital racking up medical bills. His mom says he’s even lost the tips of three toes on his right foot, and his family has to monitor his every move, even watching him with a camera while he sleeps.

Now Lucas is waiting for a transplant. Suite Salon Spa in Alpena holds a fundraiser every year during the holiday season to contribute to a worthy cause. This year, they decided to help Lucas and his family. Cindy Straley, brand manager for the salons, says they were honored to put on the fundraiser after hearing Lucas’s story through friends.

“I think it’s the giving season, and also the time of miracles and it’s truly magical that this community is able to come together and support a cause like this.”

And Reed says she’s grateful to everyone who’s stepped in to help her son. “For anyone that does donate or even just sharing what you see online, it’s all appreciated, everything.

If you didn’t make it to Thursday’s fundraiser, you can still vote for your favorite tree at Suite Salon Spa for a minimum of one dollar per vote, or you can make cash donations at any of the salons in the building, or at Northland Area Federal Credit Union. Some organizations in the community are even stepping in the match proceeds for every dollar received.

Last ‘Alpena Art Walk’ to wrap up a successful summer