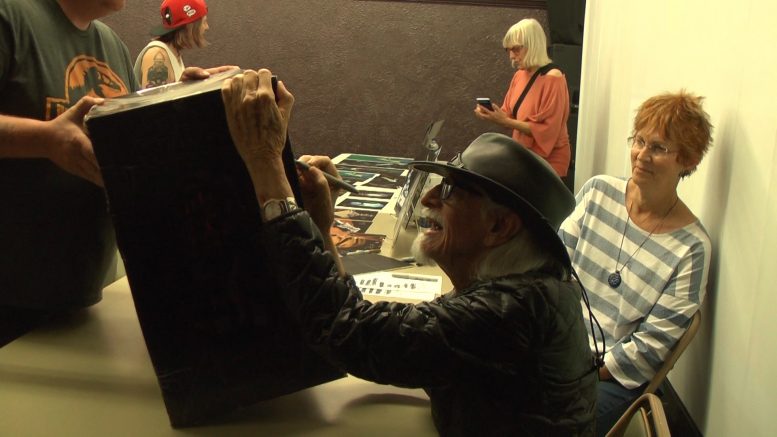 ALPENA, Mich. — Bob’s Bullpen in downtown Alpena hosted a legendary artist on Wednesday, the man responsible for the design of the Death Star and more in Star Wars. Colin Cantwell is responsible for having designed many space vehicles in the classic first Star Wars film, released back in 1977, also including the Millennium Falcon, X–wing, and Y–wing.

Cantwell’s partner, Sierra Dall, was there to help with the event and described just how much he helped influence these designs. “He said to George Lucas, what if we had a trench around the Death Star? And we had these dramatic fight scenes with everyone diving coming back out again and everything, so that’s how the Death Star got it’s trench and how the fight scenes evolved,” she said.

Star Wars fans showed up to Bob’s Bullpen, asking for autographs on their memorabilia. From pictures to toys to drones, fans were able to get them signed by the Star Wars artist.

Star Wars fan John Haske attended and was excited to meet the man that designed many of the iconic space ships in the film. “It’s interesting to meet someone who was a concept drawer and came up with these so many years ago, with so much unique ships that we know so well today,” he said.

Cantwell has been touring the country doing events like this, and has been covering the Midwest since August 10. Dall says the attention that Cantwell receives during these events is really special for him. “Aeronautical engineers come to him and have said that we’ve got into our career because of this. And several people have traveled hundreds of miles to come to his event. So it’s been really rewarding and Colin didn’t know that his work was that much appreciated.”