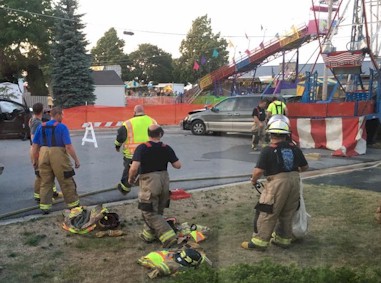 The man accused of recklessly driving through the Rogers City Nautical Festival and crashing into a Ferris wheel last summer, received his sentencing this past week.

52-year-old Daniel Lewis of Erie, Michigan, was sentenced to two years of probation, as well as more than $12,000 in court fines and restitution. Lewis was accused of driving so recklessly last August, that he caused a crash that pushed a parked van into a Ferris wheel, causing the Ferris wheel to be jarred several feet. Lewis was alleged to have reached speeds upwards of 80 miles per hour in a 25 mile per hour zone, while blowing stop signs on Erie street.

Last month, Lewis pleaded no contest to charges of malicious destruction of private property, reckless driving, and resisting and obstructing police. A charge of operating while intoxicated was dropped, as it was shown Lewis had neither drugs nor alcohol in his system at the time of the accident. Lewis claims to have no memory of the incident, due to medication he was taking at the time.