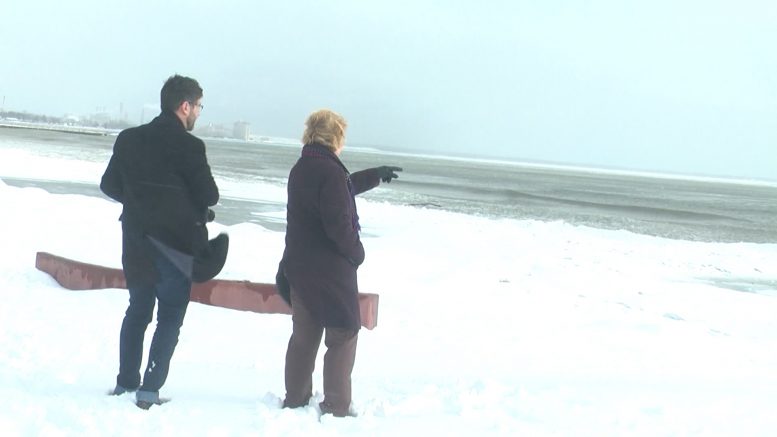 ALPENA, Mich. — Shorelines along the coast of the Great Lakes are slowly being eaten away by winds and rising water levels. The problem is a result is a global climate which is the bigger issue at hand, but Senator Debbie Stabenow visited Alpena today to figure out some ways to start fighting the problem before it turns into a catastrophe.

The senator sat in on a meeting at Alpena City Hall Tuesday morning as she prepared gather resources to fight erosion. But officials are finding that emergency funding can’t be used for a gradual problem like this one. Senator Stabenow says,

“Right now, I’m trying to figure out the best way for us to possibly change some of the way the federal programs go so they’re more focused on things like erosion, and not just the typical mass flood, hurricane, tornado.”

Locally, Rogers City and Alpena have seen the impact the of the waves and eroding shoreline in their own backyards. Alpena City Manager, Rachel Smolinski, says Alpena is already trying to remedy damage from last year.

“We’ve had some damage already that we know about to our parks, sidewalks, just some public infrastructure that we would like to have in shape by the spring, in order to, you know, make it available to the public.”

But if something isn’t done to stop mother nature, that may not be possible. According the U.S. Army Corps of Engineers, water levels in the Great Lakes are expected to reach their highest in July of this year.

There are some even bigger worries looming at the municipal level. The City of Alpena’s water treatment plant sits on the shoreline. The area also uses a system of dams that could fail if water levels start to affect their functionality. As for Senator Stabenow, she’s working to secure resources that will combat erosion statewide, and locally, before erosion swallow us up. Stabenow explains,

“We have to address erosion because we have these beautiful beaches, and we have boating and fishing, and thunder bay and all the resources that are here, but this is a wonderful community with a lot of wonderful services being provided and it’s always great to be here.”