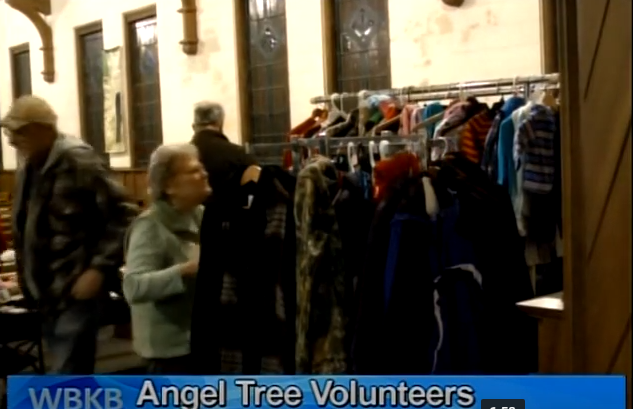 The Alpena Optimist Club, and the Word of Life Baptist Church were a major helping hand earlier this week helping the Salvation Army of Alpena gear up for their Angel Tree distribution for Christmas.

Helping hands, you name it, that’s just what they are. The Alpena Optimist Club along with the Word of Life Baptist Church worked non-stop sorting out coats; hats, gloves and toys to make sure kids that were placed on this year’s Angel Tree weren’t left out.

“Every time we get children in for our angel tree they get clothing as well as the toys. They get hat, scarf’s, mittens; they get books…all kinds of things. This year the quilters made pillowcases for each one of them so they will each get a pillowcase as well. It’s just a great time. We want to make sure that they have a great Christmas. We want to make sure everything that they need is taken care off,” Cedervall said.

With the help from volunteers, Salvation Army caption, Amy Cedervall said they were able to break numbers when it came to getting everything organized.

“Volunteers from area churches…Word of Life was a huge one, and the Optimist Club is here right now. They’ve been just burning through all of this stuff. We got through the food box packing like record time and they were still ready to go. So we’ve started doing toys and getting those sorted for the actual toyshop part of it and processed. Those all got out in a quick sort so we’re up here doing the clothes. I’m just excited because we never get to the close until like last minute,” she added.

“We had a little mystery benefactor, that’s what we’ve been calling him. We were counting kettles one morning and my husband actually found a little bundle of paper clipped together of $500 dollar bills. I was like ‘awe that’s cool.’ Well then I found one in my kettle and then it kind of became a big fun time. We ended up finding 4 of them all together in different kettle locations. It was clearly the same person because they were all folded the same way.

It was just such an exciting time to know that somebody was that generous and cared enough to help us out that much, it was just great,” she said.

As for all of Santa’s volunteer helpers, the Salvation Army of Alpena says thank you.

“If we didn’t have the volunteers my husband and i would have to be doing this around the clock to get it done in time,” Cedervall said.

Families will be able to stop the Salvation Army of Alpena on Tuesday for distribution of their gifts just in time for ole saint nick to appear on Christmas morning.

Motorcyclists take to the highways to raise awareness for homelessness