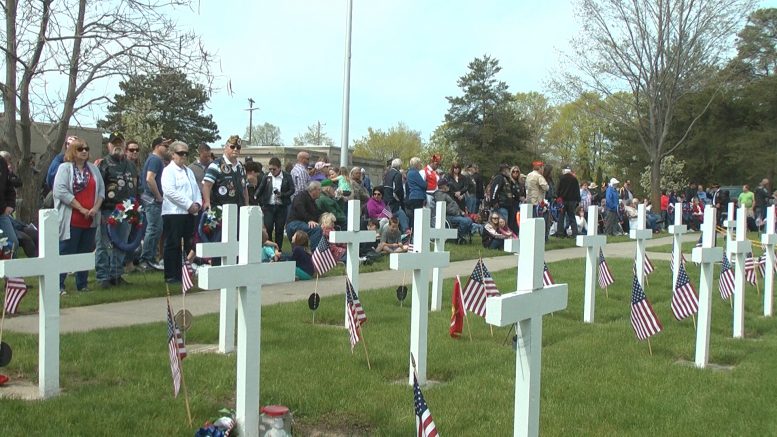 (Photo Courtesy/Mike Beiermeister) Members of the community gathered at Little Flanders Field to remember those who have fallen.

Alpena, Mich. —  On Monday, members of the Alpena community gathered to honor military service men and women who have paid the ultimate sacrifice for freedom.

Veterans, Boy Scouts, Girl Scouts, friends, and families gathered outside of the Alpena County Courthouse to remember those fallen heroes. A crowd gather around the Veterans Memorial near the corner of 8th Ave. and Chisholm St. to pay their respects to the names etched on the monuments. Women laid flowers on each war memorial that indicated where men and women from Alpena gave their lives.

Seven year Navy Veteran Rebecca Mott spoke about honoring those brave men and women by telling their stories and keeping their memory alive. Mott found her inspiration for the speech from friends and family close to her.

“Part of it was my daughter because she was in the Air Force, and she got hurt,” said Mott. “She used to sing for us all of the time, so she was the inspiration. She was Air Force… She has her struggles, so that kind of helped me with my speech a little bit, and also, friends in the community that we’ve known for years who had daughters and sons leave and not come back.”

Following the laying of flowers, veteran bikers led the way, revving their engines with military decorated bikes and vests. Members of the Military Color Guard along with Boy and Girl Scouts marched a mile and a half to Evergreen Cemetery. Flags lined the Alpena Bi–Path, as people watched the groups march toward Little Flanders Field.

“A lot of it is the heroes that we’ve lost, family members, try and keep them in our hearts, and today is their day,” said Mott.

“I can see their faces clearly as I walk along this wall, those brave young men and women who answered the assembly call. I hear their mournful whispers, and tears well up inside, as I ask the good lord above me, why they, and not I had died? And if I could have one moment, I would tell them one and all, how proud I was to serve with them while answering the assembly call.”

Word on the Street: What do you like about Alpena’s Brown Trout Festival?

Photo of the Day for Wednesday, January 30