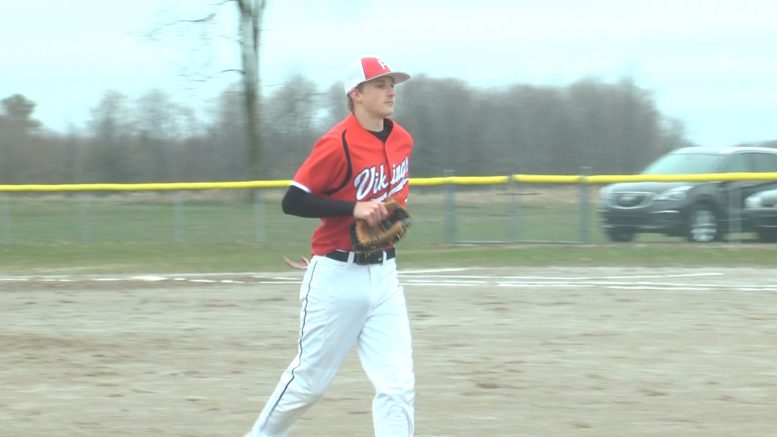 Jared Sharpe jogs off the field during Thursday's game against Alcona.

Posen, Mich — Vikings senior Jared Sharpe will continue his baseball career with the Mid Michigan Lakers. He officially signed to join the 2019 team on Wednesday.

“It’s a dream come true,” said Sharpe. “Ever since I was a little kid watching the Little League World Series that’s all I could ever think about.”

Sharpe joins Onaway’s Gavin Fenstermaker and Rogers City’s Austin Cook as members of the baseball class. The three are all friends, but it was Cook’s signing that sealed the deal for Sharpe.

“We’ve been talking for the longest time about living together in college and we always thought it would be pretty cool. Once he got the word that he was going there I was like alright, well they were talking to me a little bit, so we talked about it a little more and then finally made it a done deal.”

The Lakers are currently playing their inaugural season under head coach Fred Brown. The three Presque Isle products will have a quick impact on the young team and all can expect significant playing time. Sharpe is impressed with coach Brown and the direction that the program is going.

The Posen senior is also a talented basketball player. He surpassed the 1000 point mark during Posen’s district clinching run this past season and was one of the most prolific three point shooters in the area. The Lakers showed some interest in Sharpe joining the basketball team, but he plans to leave his court shoes at Posen.

“I saw how much time it took away from my cousin Anna and my brother when they both played college sports. I’d rather just focus on one, get school work done, and have a college experience.”