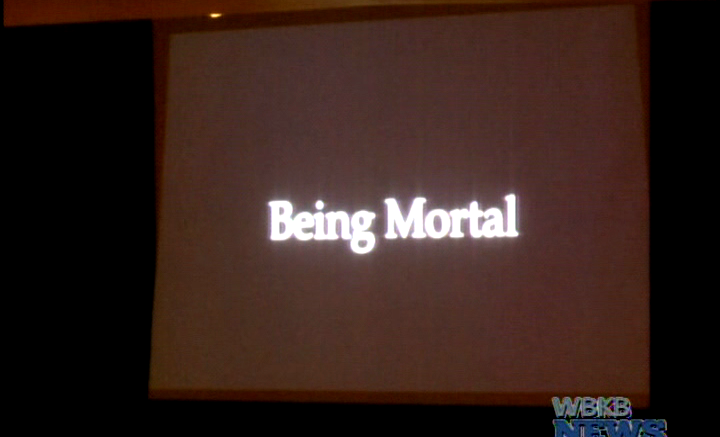 Over 150 people were in attendance at ACC earlier this week for a screening called ‘Being Mortal’ hosted by, MidMichigan Medical Center Alpena, and Hospice of Michigan.

I was there myself for the emotional event, here’s more on that story.

How is dying ever acceptable? Those are questions many people probably ask themselves and others often. Accepting death comes with a number of emotions including what should someone tell their family, where do you want to die and be buried at? Those are only a few.

Thursday MidMichigan Medical Center Alpena, and Hospice of Michigan hosted an event to talk just about death. The free screening and panel discussion showed the hit PBS Frontline documentary, ‘Being Mortal’ based on the best selling book by, Dr. Atul Gawande. Panelist revealed ways attendees could talk to their own loved ones.

“Use it (screening) as an opportunity to kind of open your mind to the subject (of death). Talk with family and friends about how it makes you feel and what you want it to be like when you’re in that situation and do it now as soon as possible, because we never know. Everybody thinks we have time to discuss this (death) and we don’t. It’s better to talk about it when you’re well, and can think about how I want things to go or how I don’t want things to go to really talk about it,” Family Physician, Medical Director of Hospice, Dr. Michelle LeFave explained.

Many times faith, and religion play’s a major role in making life decisions.

“For me, to be able to provide what I call, ‘spiritual nourishment’ because so often that can be the piece that is kind of overlooked or put on the backburner. To me that’s the most important piece in the whole dying process, is to provide that spiritual nourishment at a time for a person who is facing death, and for their loved ones who are having to say very painful goodbyes, while accepting the reality of what’s coming,” Reverend Shirley Ross-Jones said.

When patients come in for appointments, “death” is one word they probably don’t expect to hear. Some people wait until it’s too late, where time later runs out. Medication can just be a relaxation method. During Gawande’s documentary doctors repeated over and over again that people can’t always count on doctors, and miracles. A lot of times people don’t absorb what a doctor is actually telling them. Alpena Cancer Center, Dr. Hitzelberger can relate.

“There’s lot’s of things to discuss, but when they come into my office at first they hear probably about 10% of what I say. So I try not to say too much during the first visit,” he revealed.

There’s no right time to talk about death, it’s just a topic that has to be discussed, and hopefully ‘Being Mortal’ can encourage that with all families.