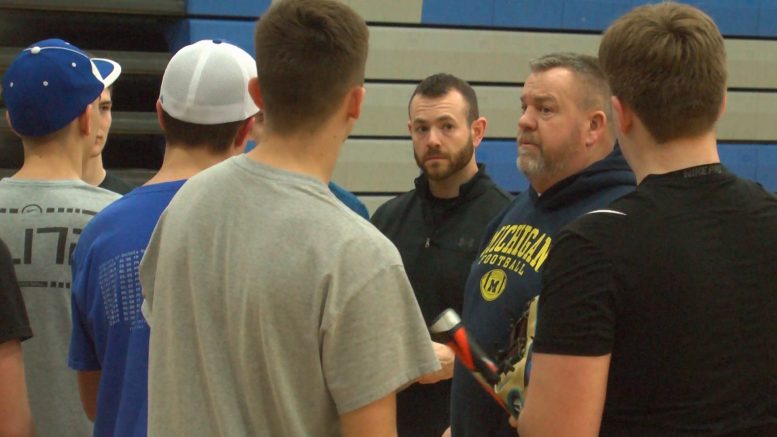 Oscoda, Mich. — The Oscoda Owls have one thing in mind this season, improvement. The boys in blue finished the 2018-19 season (18-6) overall and (6-2) in the North Star League taking the title. Their eyes are set on the prize again this year, but this season they have a new head coach.

Mark Whitley took over the baseball head coaching role after Ron Lamrock stepped down. Whitley was the previous head softball coach, and last season the girls finished (13-8). He handed the reigns over to his son Tucker Whitley.

The Owls, led by senior Jacob Condor, believe they can achieve the same and more this year. Oscoda returns four seniors this season. Whitley has brought over the same mantra from football, defense is key.

The Owls travel for their first game of the season Friday, April 5th against the Ortonville-Brandon Blackhawks. The first pitch will be thrown at 4 p.m.

Jacob Condor: Senior Pitcher and First Baseman
The big, powerful leader for the Owls is ready to put his strength to use this season. While is offense was lacking as a junior, the senior has practiced all off-season in the batting cage. His arm will be back on the mound. Expect Condor to hammer a few shots past the fence this season.
Gabe Kellstrom: Sophomore Center Fielder and Pitcher
This sophomore has speed and awareness to chase down any ball in the outfield. He’s reaction time is quick, so not many balls will roll past him. Kellstrom adds more depth to an already strong pitching staff.
Owen Franklin: Sophomore Pitcher
Franklin finished his freshman season as a first-team all-league pitcher. He’ll provide a lot of athleticism on the mound.
Nathan Moeller: Senior Pitcher, Catcher and Outfielder
The senior will be Oscoda’s all-around utility player. He adds depth to the pitching staff and provides speed and awareness in the outfield.
Joel Livvix: Senior Outfielder
The senior is fast an is going to help the Owls in the outfield. He can track a ball well.