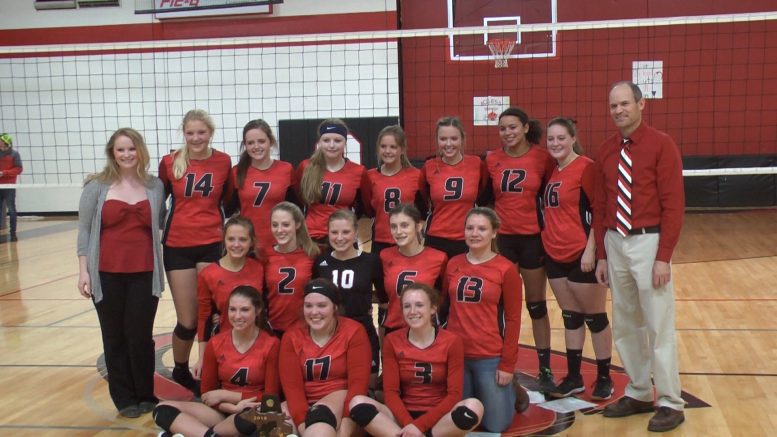 ONAWAY — The last time the Cardinals won their district in volleyball was in 2014. None of the current Cardinals were on the 2014 team, so this was new territory for them.

Onaway started the playoff season well by winning the Presque Isle championship. They also hosted their own district and had the chance to play for a title in front of their home crowd.

Each of Onaway’s starters had at least one kill in the first set and they subbed out individually when they reached 20 points so the crowd could cheer them off. The Cardinals finished off set 1 with a 25-9 score.

Set two allowed Head Coach Steve Watson to play some of his younger players as the Cardinals still won set 2 25-20.

The third set saw all of Onaway’s starters back in the game with a score mirroring the first set. Watson once again pulled some of his starters: this time his seniors to the applause of the Cardinal supporters.

“75% of the teams in the state of Michigan don’t get to win a district,” Watson said after the game. “You never take for granted the opportunities to put another number up on that banner.”

It’s hard not have success without critics. Kennedy Crawford knows this all too well.

“People are saying, oh you had an easy district, but I mean we still had to work for it. You can’t underestimate anybody,” said Crawford. “This is the first district I’ve ever won, so it’s definitely rewarding. We’ve worked hard for it.”

Onaway is among the most fundamentally and technically sound programs playing in North East Michigan. They serve well, have multiple weapons to break down opponents’ defenses, and play very solid defense.

The Cardinals start regional play on November 6th when they travel to Mackinaw City and play Pickford. The game starts at 7:00 pm.

Roundball Roundup: Wildcats get back to their winning ways; Owls clobber Braves