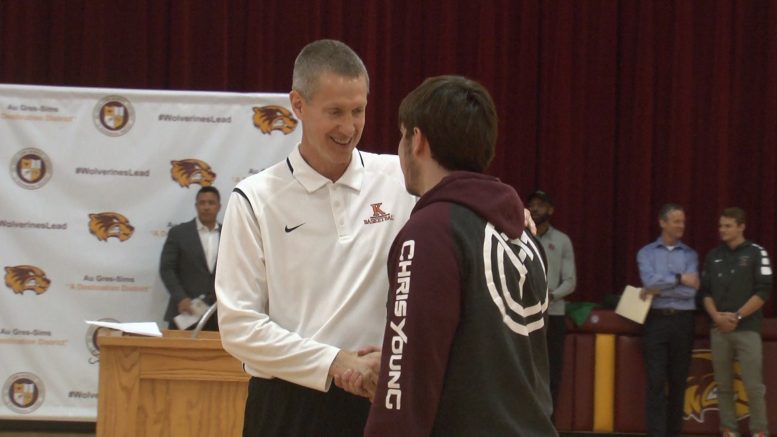 Au Gres-Sims — For over five years the North Star League has organized at least two sportsmanship summits a year for student athletes from class D and a few class C schools. On Wednesday, Au Gres-Sims hosted their first summit called “Small Schools, Big Dreams”, which brought back legends of the game like Mio’s Jay Smith and Ty McGregor, Posen’s Korynn Hincka and Whittemore-Prescott’s Jessie Rayburn. Each high school was allowed to bring two athletes from every grade level. Once these students are selected, they attend every single summit throughout their career.

“If you leave here only knowing the four or five people that came with you, shame on you,” said Smith in the opening speech. “Another missed opportunity.”

Mio legend and Michigan’s all-time leading scorer Jay Smith said being successful in life involves building relationships. One of the many lessons learned at the sportsmanship summit.

“It’s been super nice to have the opportunity to meet other student athletes from other schools and know that there’s other students that go through the same struggles that you do,” said Mio senior Lauren Kuffel. “You know, coming home late from games, having to keep up with your academics.”

The former athletes, area coaches and more traveled to Northeast Michigan to share their experiences, and which ones worked best for them.

“Everybody’s got a story,” said Smith. “I mean its…I think growing up in this area where you’ve walked the hallways where they’ve walked in. I mean those kids have walked where we walked. To me that’s special.”

Everyone has to pave their own path, but it’s helpful learning from others and their decisions.

“It’s great to tell them our experiences and how we succeeded,” said Rayburn. “Plus, some of our adversities that we’ve handled and how we’ve come out on top or what’s best for us.”

Every summit is unique. One year, when the North Star League made two divisions within, the athletes received the challenge to name them.

It took a team effort to name the conferences, just like it takes a total commitment to win games.

“It’s the emphasis on hard work,” said Au Gres-Sims senior Ryan Schwiderson. “You have to work hard to get stuff achieved and that is something very valuable to bring to your teammates to inspire them to work harder.”

Nothing comes easy. Current Kalamazoo Basketball Head Coach Smith had to overcome obstacles to get to where he is today.

Thunderbolts Take The Hillman Tigers To Extra Innings For The Win

Chad Zeien selected as Regional Coach of the Year